Spot power prices fluctuated throughout yesterday's session but recorded strong gains by the end of trading on the back of lower wind production and a drop in nuclear availability. Prices are expected to stabilise today but some downward pressure could be provided by the outcome of the EU 2030 carbon reduction goal meeting today. Gas prices were boosted yesterday by rising demand levels, while an agreement is also yet to be reached in Brussels regarding Russian supply. Demand levels have fallen this morning in the UK and Europe with mild weather expected over the next few days; bearish movement is expected this afternoon as a result. Today's prices can also be found in an easy to read table on our 'current UK energy price' page.

Talks between Ukraine, Russia and the EU failed to come to a conclusion yesterday which helped gas prices climb higher. Prices on the near-curve increased by around 0.80ppt on average, while contracts further along the curve posted gains of around 0.20ppt. Falling wind generation and numerous outages at nuclear facilities resulted in multiple gains for near-curve power contracts yesterday. Further along the curve most contacts followed their gas counterparts and displayed small gains.

The majority of gas contracts recorded a loss this morning and took influence from falling oil prices. The UK gas system opened 24mcm short as a result of lower Norwegian output but this failed to have much influence on Day-Ahead which opened at 52.50ppt. Day-Ahead power fell by £1.25/MWh this morning as peak demand levels are expected to decrease to 43GW today. The usual drop in demand on Fridays helped restrict any upward movement caused by weaker wind, which has plummeted to around 3.3GW.

Market close data has revealed that the 1-year forward price for commercial gas both commercial electricity climbed slightly higher - closing at 56.58ppt and £50.88/MWh, respectively. This can be seen in the graph below. 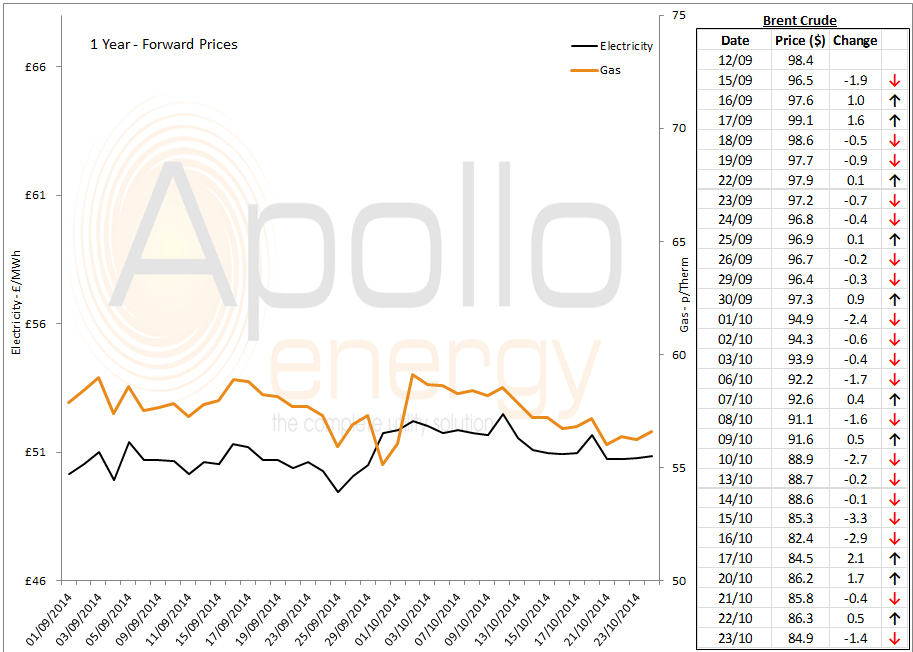 Brent 1st-nearby prices moved down yesterday as crude oil inventories in the US have grown. Prices fell from around $87/b to below $85/b and continued to trade at that price this morning.