Spot prices displayed no clear trend on Friday with some contracts strengthening and others falling by the end of the session. A varied weather forecast in Europe resulting in differing demand expectations is the cause of this mixed movement. Gas prices were offered support from increased demand levels and ignored a healthy supply picture which was helped by strong Norwegian output. Today UK LDZ demand increased by 6mcm and is currently 13.7% above the seasonal average, while an unexpected outage should limit Vesterled flows to the UK; prices could move higher as a consequence. Today's prices can also be found in an easy to read table on our 'current UK energy price' page.

Near-curve gas prices registered gains on Friday despite a long UK system throughout the session. Day-Ahead strengthened due to a higher demand forecast for today, gains were limited however as LNG and Norwegian flows remain healthy and Brent prices dropped. Prompt power contracts were generally bearish on Friday as Day-Ahead fell by £0.25/MWh following the return of a coal-fired facility. A French interconnector also increased its output and provided an extra 11GWh. Permit supply concerns helped carbon prices climb higher which led to numerous gains on the far-curve.

Gas prices on the near-curve fell this morning as milder weather is expected for the end of the month and beginning of December. An increase in Iranian oil exports following an agreement in Geneva has helped Brent fall, also helping most far-curve gas prices move down. Day-Ahead power opened £0.60/MWh higher despite an improved wind generation forecast. Gas prices were the main driver of the power curve while numerous contracts on the far-curve opened unchanged. Front-Month APi2 coal decreased by £1.00/tn and offered additional support to the bears.

Market close data has revealed that the 1-year forward price for both commercial gas & commercial electricity decreased - closing at 67.32ppt and £52.50/MWh, respectively. This can be seen in the graph below. 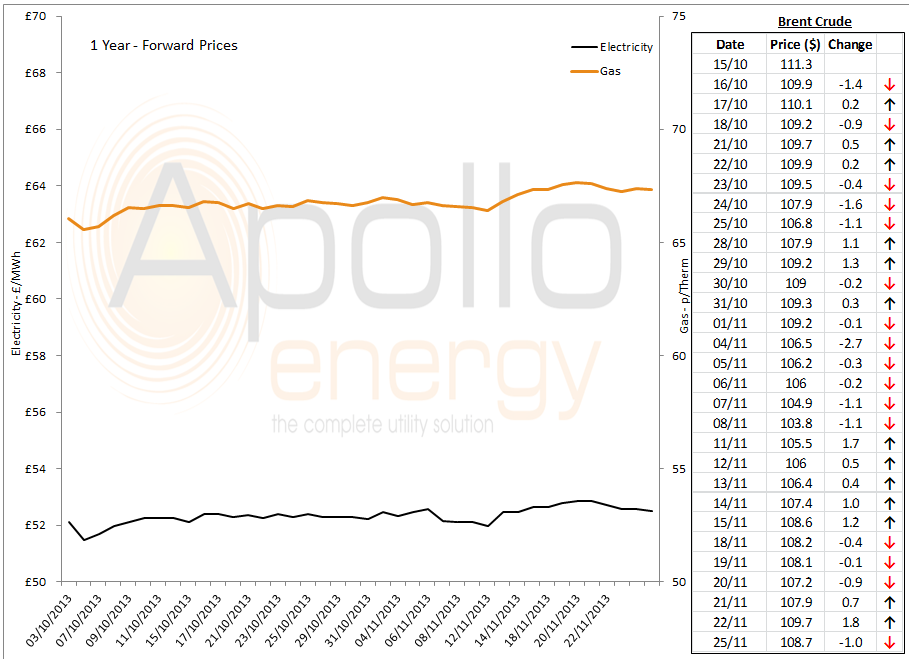 Brent 1st-nearby prices fell by over $2/b this morning as a deal has been struck between Iran and the world powers in regards to the country's nuclear programme which has eased supply concerns. Brent currently stands at $108.3/b and WTI also moved down on the back of this news opening at $93.3/b.