Spot power prices are on the rise due to the colder weather forecast which should result in a surge in demand. Some bearish support was provided by strengthening wind generation and the scheduled return of two nuclear reactors in France but this did little to restrict the gains. Gas prices moved down yesterday as demand levels were relatively unchanged and overall supply was healthy. Prices have opened higher this morning with direction coming from an expected drop in temperatures; however, downward movement is anticipated this afternoon due to comfortable supply levels. Today's prices can also be found in an easy to read table on our 'current UK energy price' page.

Gas fundamentals were largely bearish yesterday as LNG supply is healthy, with more deliveries scheduled to arrive in the UK next month. Some upward pressure was provided by outages at several gas facilities but despite this, losses were evident across the curve. In terms of power, near-curve prices fell yesterday as wind generation levels are improving with levels of around 5GW expected. Weaker gas dictated the rest of the curve as the majority of contracts recorded a loss.

Overall gas flows are 10mcm higher than Monday's levels with withdrawals from the Rough storage facility almost double; the UK gas system has opened 10mcm long as a result. Further along the curve some prices moved down on the back of a stronger British Pound and falling Brent. Seasonal power contracts moved higher this morning with impetus coming from strengthening carbon contracts. Meanwhile, a revised forecast predicts a 50% drop in wind generation tomorrow which has supported prices on the near-curve.

Market close data has revealed that the 1-year forward price for both commercial gas & commercial electricity increased - closing at 49.28ppt and £45.70/MWh, respectively. This can be seen in the graph below. 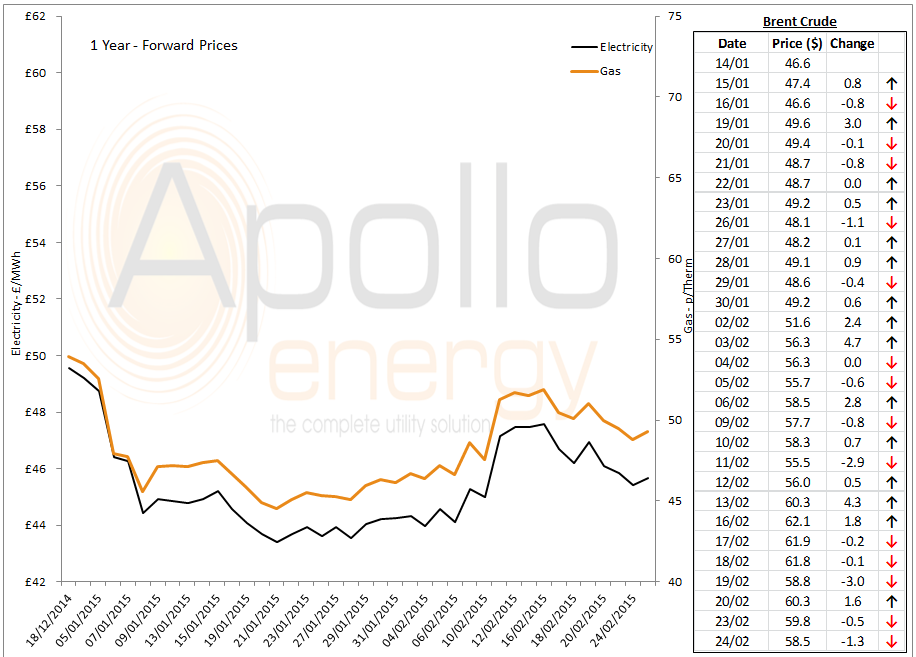 Brent 1st-nearby prices have recorded further losses and currently trade below $59/b following a loss of over $1.30/b overnight. At present there are no obvious fundamentals to support prices, helping the bears seize control of the oil market.