Spot power prices have strengthened as renewable generation remains low and isn't expected to pick up until next week. The on-going tensions in Ukraine are also having an effect on prices and with little change to fundamentals this morning prices are expected to increase further this afternoon. Gas prices decreased yesterday as low demand levels and comfortable supply offered support to the bears. UK LDZ demand is expected to reach its lowest level of 2014 today but concerns in Eastern Europe and an expected rise in oil could lead to upward movement. Today's prices can also be found in an easy to read table on our 'current UK energy price' page.

Day-Ahead gas fell by 0.05ppt yesterday as the UK gas system was long throughout the day. The rest of the curve took a different direction with most contracts displaying a gain which ranged from 0.15ppt for Summer-16 to 0.90ppt for Q4-14. Power prices took influence from gas and moved higher with Day-Ahead rising by £0.60/MWh on the back of a low wind generation forecast for today. Seasonal contracts recorded gains of between £0.25/MWh and £0.70/MWh yesterday with a weaker British Pound a factor.

The gas curve displayed an upward trend this morning with some contracts rising by as much as 0.70ppt. Day-Ahead added 0.60ppt to its price to open above 49ppt as gas flows in general are rather low. Movement was mixed on the power curve although most contracts moved higher. Day-Ahead displayed the biggest change as the contract dropped by £2.00/MWh with much higher wind generation levels forecast for tomorrow.

Market close data has revealed that the 1-year forward price for both commercial gas & commercial electricity moved higher - closing at 60.58ppt and £51.23/MWh,respectively. This can be seen in the graph below. 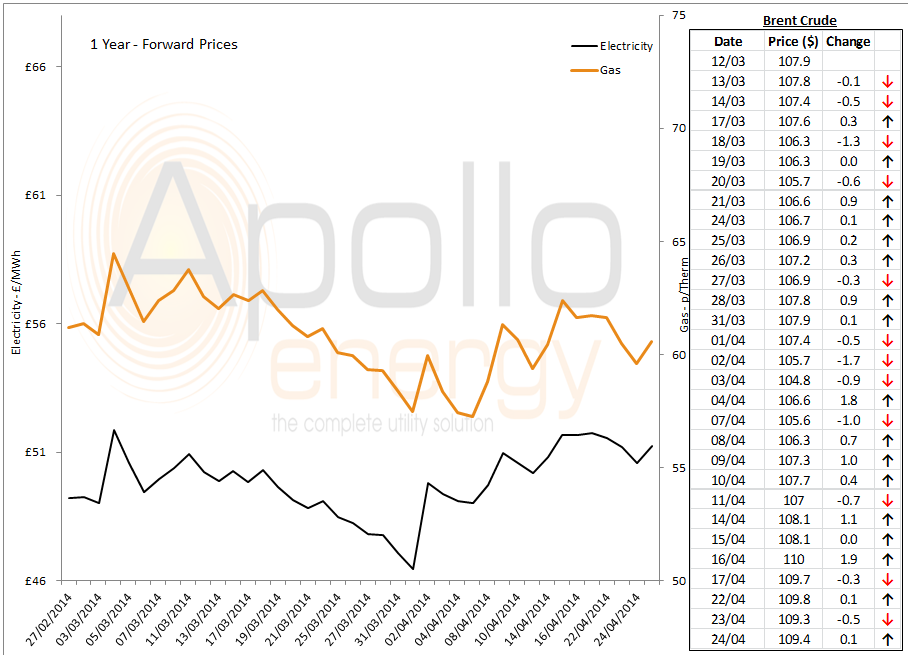 The Brent-1st nearby price is practically unchanged this morning and remains just over $109/b, while WTI has fallen by $0.70/b and currently trades around $101.5/b.