Spot power prices moved slightly higher yesterday as the UK gas system is rather tight at present due to a number of outages at power plants in Europe. Prices are expected to stabilise this afternoon as there is no news of further tensions in Ukraine and coal has maintained its price. Gas prices are generally unchanged from Friday as the UK market was closed due to the bank holiday and European trading was minimal. Above average temperatures are forecast for this week, Norwegian flows have improved and three LNG deliveries are scheduled next month; downward movement is expected as a result. Today's prices can also be found in an easy to read table on our 'current UK energy price' page.

Gas prices rallied higher on Friday with Day-Ahead climbing by 0.15ppt and Front-Quarter increasing by 0.10ppt. Linepack was short for most of the day as Norwegian and LNG flows decreased. Gains were also displayed on the far-curve with Summer-15 showing the largest movement by adding 0.25ppt to its price. Movement varied on the power curve as Day-Ahead rose by £0.40/MWh due to the bank holiday weekend and failed to take influence from the return of a nuclear power plant and the Dutch interconnector. In terms of monthly contracts, June-14 decreased by £0.05/MWh and August-14 saw a drop of £0.25/MWh, while seasonal contracts showed almost no change.

Concerns regarding the Ukrainian situation have calmed slightly following the appointment of a new president, providing a positive outlook to the gas market. Losses were displayed across the curve with contracts on the near-curve falling by as much as 1ppt. The UK gas system was balanced at the start of today's session despite Norwegian output remaining at low levels. Instead improved flows from St Fergus and Teeside helped strengthen supply, while gas storage levels are in excess of 70%. Wind generation levels are expected to improve tomorrow which has helped to weigh on Day-Ahead power, with the contract falling by £0.30/MWh. The rest of the near-curve took influence from weaker gas.

Market close data has revealed that the 1-year forward price for both commercial gas & commercial electricity climbed higher - closing at 58.52ppt and £49.70/MWh,respectively. This can be seen in the graph below. 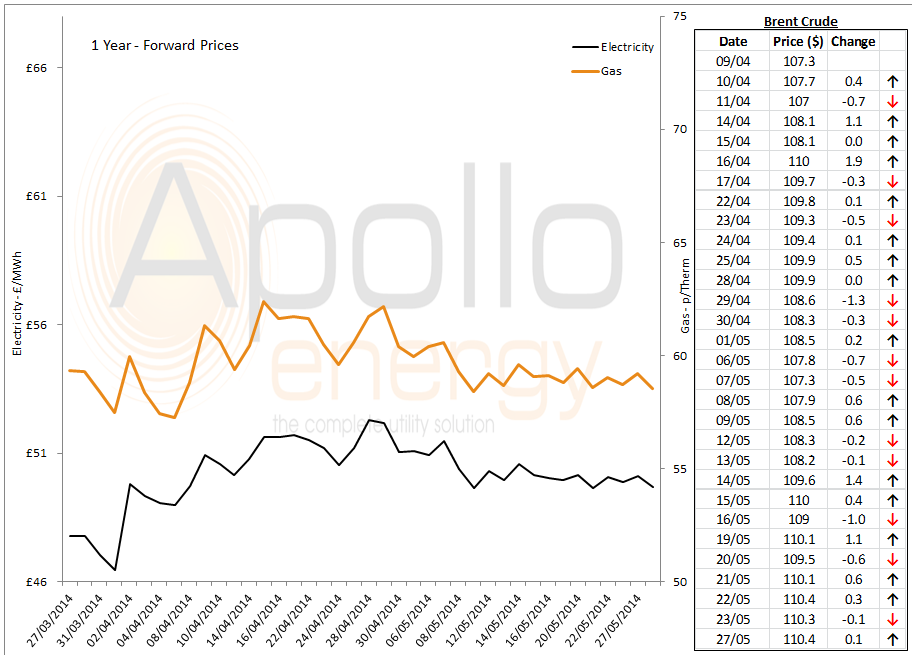 Despite the closure of the UK and US markets yesterday Brent 1st-nearby prices have climbed higher this morning and currently sit above $110.6/b, while WTI stands at around $104.4/b.