UK Spot power prices saw some downward movement yesterday as power supply is set to increase this weekend and into next week. Nuclear availability is set to improve in France as temperatures cool down whilst demand in general is lower.

NBP spot prices were weighed down by the Norwegian field coming back online. British imports via Langeled rose to 44mcm on Thursday, almost doubling from 17mcm the day before. The UK system remained oversupplied despite high storage injection and demand from gas fuelled power stations.

UK gas prices continued on their downward trend throughout yesterday's session as the system opened 7mcm long, increasing to 13mcm in the afternoon despite high demand. Demand yesterday was more than 15% above the seasonal average at 176mcm. Further out on the curve contracts gained value due to the depreciation of the Pound against the Euro.

UK gas demand is expected to increase to almost 30% above seasonal norms today on the back of reduced wind output and an increase in IUK exports. The outlook is expected to be bearish for today's session as oil prices are expected to weigh on the far curve.

The UK power curve saw widespread gains this morning, with Summer-16 adding £0.60/MWh to its value. Day-Ahead contracts however shed £1.50/MWh this morning as power systems are set to be better supplied today. Wind generation is expected to be down at 1GW today, whilst solar generation will also fall from 2.3GW to 1GW today.

Market close data has revealed that the 1-year forward price for both commercial gas and commercial electricity increased slightly - closing at 44.09ppt and £43.50/MWh, respectively. This can be seen in the graph below. 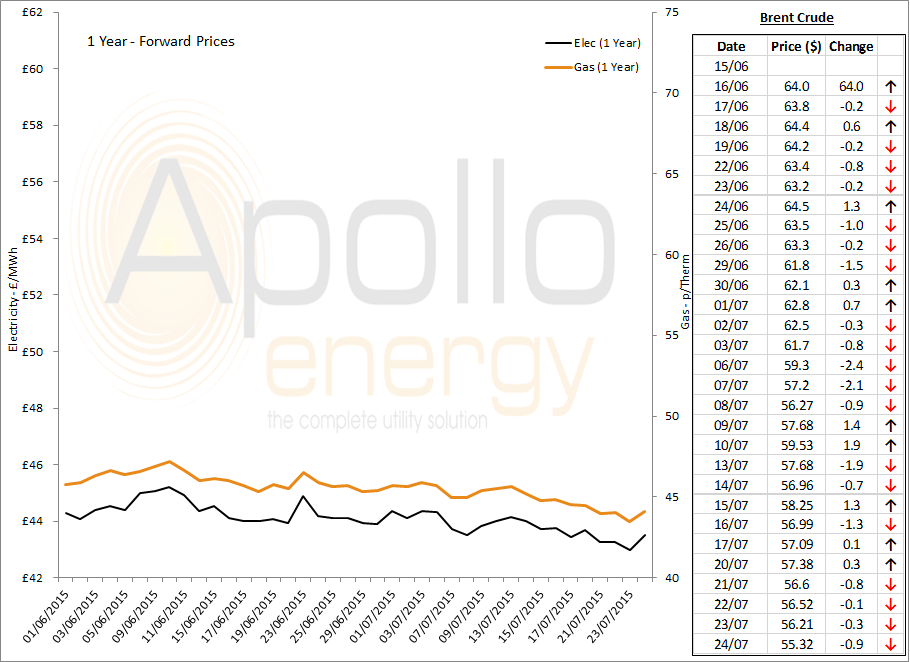 Despite closing at its lowest in several months, Brent Crude recovered some value this morning to reach $55.32/b. Oversupply and weak economic data from China will weigh on Brent Crude today, with the bearish pressure expected to continue throughout today's session.