Spot power prices moved higher yesterday due to an expected drop in wind production for today, although improved nuclear availability in France offered some bearish sentiment. Gas flows via the Langeled and BBL pipelines fell which led to a tighter UK gas system; prices made gains as a result. Today UK LDZ demand is expected to grow once again although Norwegian supply levels should improve which could see November-13 prices move down. Today's prices can also be found in an easy to read table on our 'current UK energy price' page.

Gas prices on the near-curve climbed higher yesterday except Day-Ahead which ended the session unchanged. Stronger prompt prices took influence from reduced gas flows at numerous terminals due to maintenance and unexpected outages. On the far-curve seasonal contracts moved down along with weaker Front-Month Brent. On the power curve both Day-Ahead and Front-Month contracts fell by the end of the session thanks to healthy wind production. Further along the curve contracts also made losses due to falling Brent while lower carbon prices also added to the bearish tension.

Movement was mixed on the gas curve this morning with Day-Ahead dropping by 0.40ppt thanks to a healthy gas system while Front-Month contracts ignored weaker Brent prices and moved higher. Imports via the Langeled pipeline were around 43mcm last night but decreased to 33mcm by the start of the today's trading session. An LNG delivery is expected to arrive at South Hook tomorrow and send-out levels stand around 20mcm. Temperatures are expected to pick up slightly tomorrow and wind generation is also forecast to improve which has helped Day-Ahead plummet to £46/MWh, a loss of £3.15/MWh. The rest of the curve displayed smaller losses of around £0.15/MWh as APi2 coal prices strengthened and there are concerns regarding Columbian exports.

Market close data has revealed that the 1-year forward price for both commercial gas & commercial electricity made a small loss - closing at 66.78ppt and £52.28/MWh, respectively. This can be seen in the graph below. 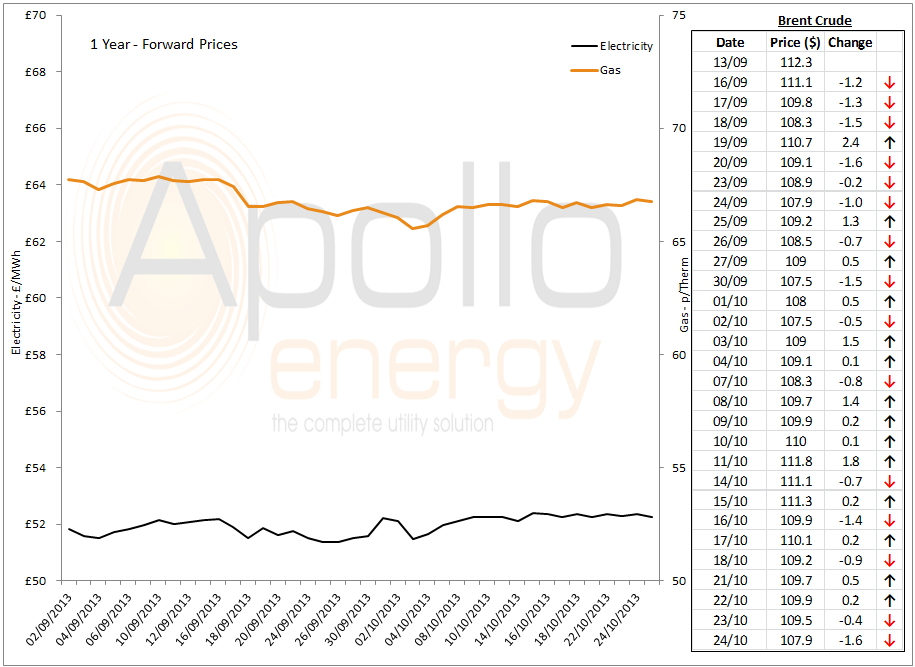 Crude oil prices fell yesterday on the back of a bearish US inventory report which led to Brent 1st-nearby prices shedding $2.71/b to close at $107.8/b. WTI prices are close to a 4-month low and fell by $0.94/b yesterday.