Spot power prices moved down yesterday on the back of a healthier supply picture and falling demand. Although prices are still trading higher than they were at the start of the week when wind production was much stronger; prices are expected to stabilise this afternoon with further losses a possibility. Gas prices decreased yesterday due to improved fundamentals, with mild weather expected over the weekend combined with comfortable supply. The UK gas system is well-supplied this morning and demand levels remain below average, which should lead to further losses this afternoon. Today's prices can also be found in an easy to read table on our 'current UK energy price' page.

Gas prices displayed a bearish trend yesterday with Day-Ahead the biggest mover, recording a loss of 0.50ppt. The rest of the curve also moved down but the losses were less prominent with Front-Month and December-14 falling by 0.35ppt. Healthier supply levels and lower demand caused by milder weather helped prices decrease. The majority of near-curve power contracts showed little movement yesterday with Day-Ahead and several other contracts closing unchanged. Further along the curve prices followed their gas counterparts with November-14 shedding £0.40/MWh from its price.

Day-Ahead gas displayed a further drop this morning and opened the session at 50.70ppt, as the system was 11mcm long due to improving flows from BBL and Langeled. Further along the curve November-14 dropped by 0.55ppt and now trades at 53.25ppt. Substantial downward movement was observed on the power curve this morning with Day-Ahead opening at a £2.15/MWh discount, with higher wind generation expected on Monday; wind speeds are expected to reach around 45mph.

Market close data has revealed that the 1-year forward price for commercial gas both commercial electricity climbed decreased - closing at 56.40ppt and £50.68/MWh, respectively. This can be seen in the graph below. 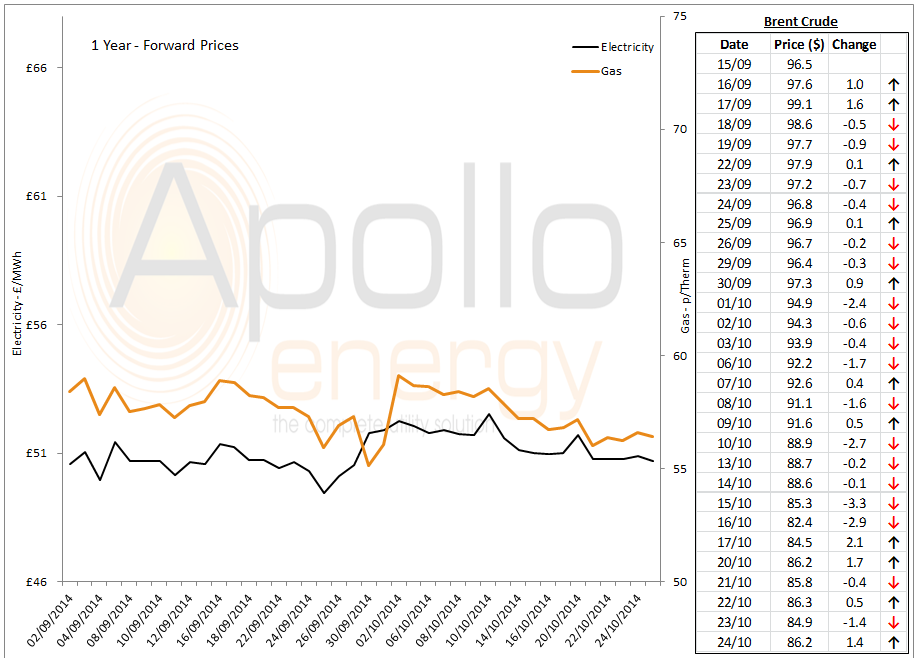 Brent 1st-nearby prices moved higher yesterday following reports of Saudi Arabian oil cuts in the previous month. Brent climbed from below $85/b to $86.5/b this morning and WTI also increased.