Spot power prices remained relatively flat over the weekend showing some resistance to a reduction in both run-of-river hydroelectric and nuclear generation across France. With delivery due in a few days, prices have yielded to bearish pressure this morning, on the back of comfortable supplies and low demand. The EU Council meet today for the formal validation of carbon backloading, which has likely provided the impetus for carbon to top the â‚¬7-7.15/ton level for December 14. Friday saw Day-Ahead gas prices drop below 58p/th which we have not seen since June 13, whilst the bearish pressure we saw from the continued comfortable supply/demand balance last week persisted on near curve prices over the weekend. Conditions on the near curve are expected to weaken today as a result of unchanging weather forecasts and stable supplies, with losses expected to spread to the far curve, namely Cal 15. UK LDZ demand sits at 16.5% below the seasonal average today. Today's prices can also be found in an easy to read table on our 'current UK energy price' page.

Friday's session saw Day-Ahead contracts fall 0.40ppt, whilst March-14 and Summer-14 both closed at a discount of 0.30ppt. The system remained neutral to bearish for the majority of the session, with this bearish pressure being reinforced by Brent dropping below $110/bbl. Power prices also closed Friday's session at a discount, as the low gas prices and high (6GW) wind generation helped lower prompt prices. Seasonally, we saw little movement across the curve, with Winter-14 closing flat. Dwindling demand alongside a supply surplus throughout Europe assisted API2 contracts to fall to an unprecedented low.

Day-Ahead gas contracts recorded a 0.70ppt loss this morning as Linepack opened 24mcm long due to reduced demand and warmer than average temperatures. Near-curve prices recorded a range of discounts, namely March-14 which dropped 0.75ppt. A slight bearish influence was also felt across the far curve. Following a fall in wind generation today, down to 4GW, the predicted rise back to 6GW for Tuesday has seen Day-Ahead power prices drop by £0.45/MWh. As with the gas curve, the near power curve was influenced by low demand and as such displayed losses. There is mixed sentiment across the far curve as some minor gains are seen on the back of strengthened EU Carbon prices.

Market close data has revealed that the 1-year forward price for both commercial gas and electricity shed value - closing at 61.13ppt and £49.65/MWh, respectively. This can be seen in the graph below. 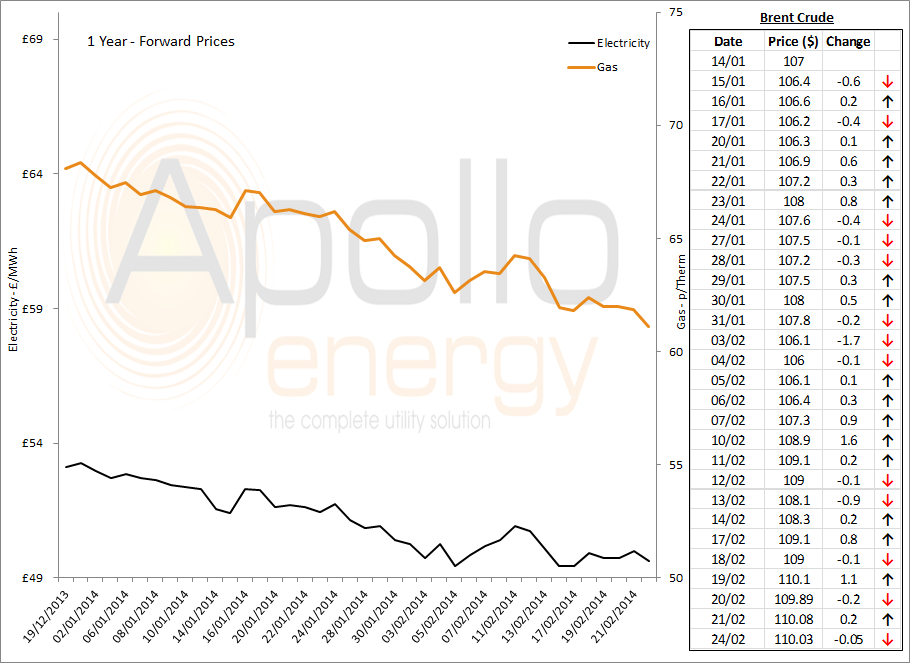