Spot power prices remain low when compared to the seasonal average as healthy supply levels and reduced demand continue to push contracts down. Climbing carbon prices could provide support to the curve today but little change is expected overall. Gas prices were dictated by higher than average temperatures for this time of year and fell further yesterday. Imports into the UK are also healthy and have resulted in a comfortable system; prices could decrease further as a result. Today's prices can also be found in an easy to read table on our 'current UK energy price' page.

Gas contracts displayed losses yesterday, falling by 0.30ppt on average on the back of low demand levels. Day-Ahead took direction from a long UK gas system and decreased by 0.40ppt, while a stronger British Pound also weighed on prices. Power prices were influenced by weaker gas with the majority of contracts closing lower than their opening price. Day-Ahead ended the session at £42.25/MWh, decreasing by £0.40/MWh following strong wind generation which made up for a drop in nuclear availability.

The gas curve displayed a series of gains this morning with Day-Ahead opening 0.40ppt higher and March-14 rising by 0.35ppt. Gas flows were reduced slightly this morning as output via the BBL pipeline dropped to 32mcm; however the UK gas system is still well-supplied. Movement was mixed on the power curve but the majority of contracts moved higher, including Day-Ahead which gained £0.45.MWh. A lower wind generation forecast for tomorrow was the main driver of the Day-Ahead contract while stronger APi2 coal also offered support to prices.

Market close data has revealed that the 1-year forward price for commercial gas increased while commercial electricity recorded a loss - closing at 61.35ppt and £49.45/MWh, respectively. This can be seen in the graph below. 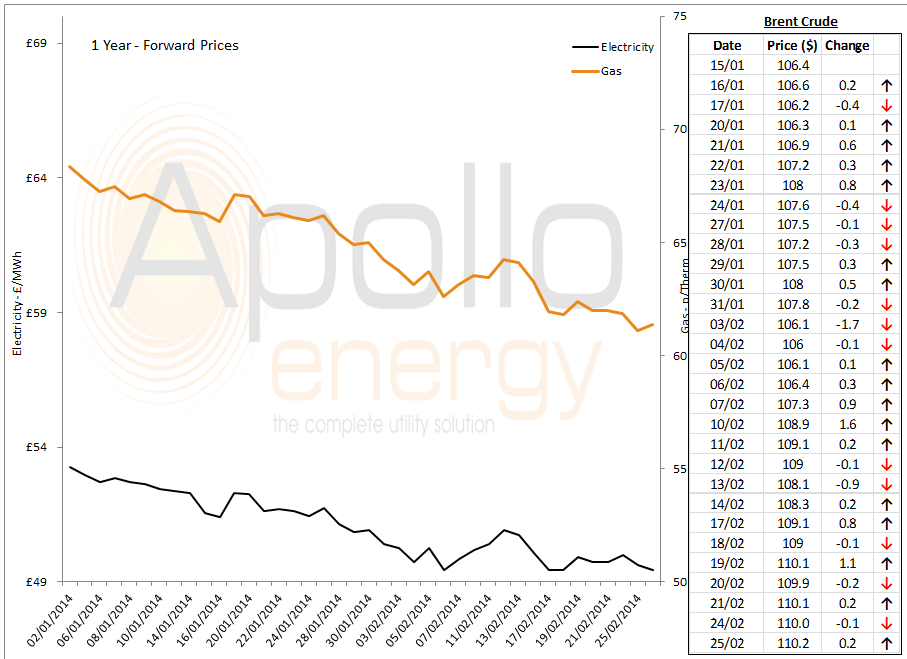 Brent 1st-nearby prices climbed higher yesterday and edged closer to the $111/b mark, however a slight decline occurred overnight following an improved weather forecast in the US.