Spot power prices moved higher yesterday as a major power station in Belgium is set to be temporarily shut down until the 13th of May, at a time when wind generation is also forecast to decrease. Yesterday's supply concerns continue to affect the market this morning with further upward pressure coming from stronger gas. Gas prices increased as imports into the UK were reduced following an outage at a Norwegian facility, while storage concerns continue to assist the bulls. Yesterday's outage in Norway has now been resolved, however, the UK gas system is still under-supplied as UK exports are higher, resulting in additional gains. Today's prices can also be found in an easy to read table on our 'current UK energy price' page.

Gas prices displayed gains yesterday due to an outage at the Norwegian Troll field which resulted in a large drop in production. Elsewhere, another Norwegian facility in Heimdal has encountered issues over the past week, further affecting production. Power contracts added to their price after posting early morning losses with rising gas and fuel providing upward pressure. Day-Ahead was an exception to the price increases and showed little movement as a warmer weather forecast for today restricted the bulls, ignoring weaker wind generation.

Near-curve gas prices have moved higher again this morning on the back of a short UK gas system due to an increase in exports to Belgium. Further out, seasonal contracts continue to rise due to the potential capacity reduction at the Rough storage facility. An expected drop in generation levels in Belgium have supported power prices this morning and the majority of contracts have opened at a premium. Day-Ahead has opened unchanged as consumption and wind generation are expected to be similar to today's levels.

Market close data has revealed that the 1-year forward price for both commercial gas & commercial electricity increased - closing at 48.28ppt and £45.15/MWh, respectively. This can be seen in the graph below. 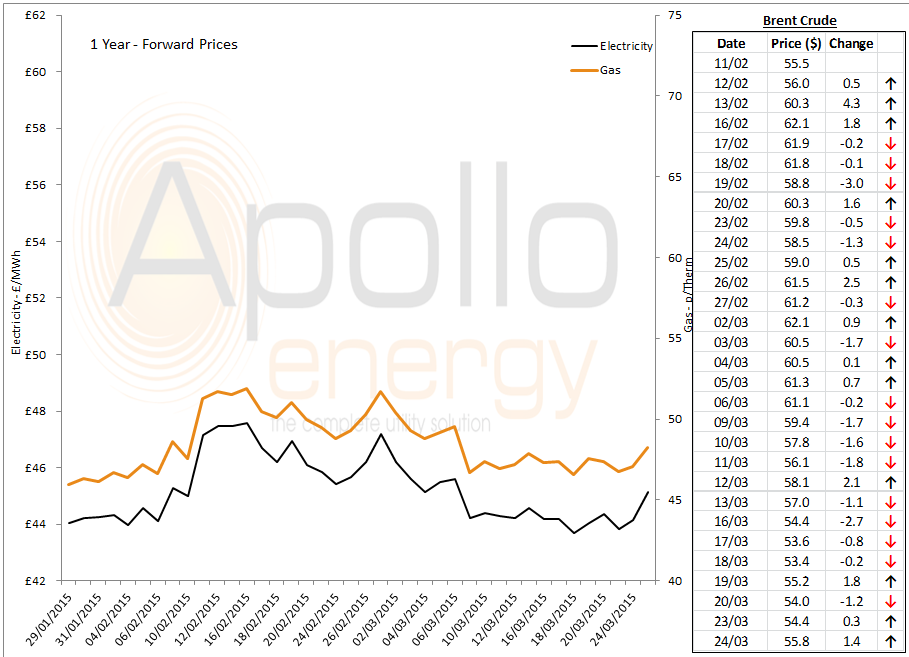 Brent 1st-nearby prices recorded another gain this morning and added almost $1.4/b, now trading at $55.75/b with weaker industrial data in China the main market driver.