Spot power prices have moved down as wind generation was expected to increase in the coming days and temperatures are set to remain mild. Stronger gas has offered support to some contracts but overall fundamentals are healthy. Gas prices increased on the back of an under-supplied UK gas system yesterday due to a rise in exports. Traders are still awaiting confirmation on the effects of a fault at Centrica's Rough storage facility which has pushed some contracts higher, with further support coming from a short gas system. Today's prices can also be found in an easy to read table on our 'current UK energy price' page.

Gas prices recorded sizeable gains yesterday as supply levels were weaker and European demand was higher. An increase in exports to Belgium was the main factor for the reduction in overall supply and the effect of the fault at the Rough storage facility was still unclear, a weaker British Pound also provided support. The majority of power contracts ended the session higher and tracked their gas counterparts closely. The prompt contract increased as a drop in wind generation was forecast for today, while seasonal contracts also inched higher.

The UK gas system has opened short again this morning which has helped near-curve gas contracts record gains. The on-going situation at the Rough storage facility is also a bullish factor and seasonal contracts continue to move higher. Most power contracts were influenced by gas and added to their price this morning, with the gains more prominent on the far-curve. Day-Ahead recorded a £1.05/MWh loss as a drop in demand is expected tomorrow and wind generation is forecast to improve.

Market close data has revealed that the 1-year forward price for both commercial gas & commercial electricity increased - closing at 48.40ppt and £45.08/MWh, respectively. This can be seen in the graph below. 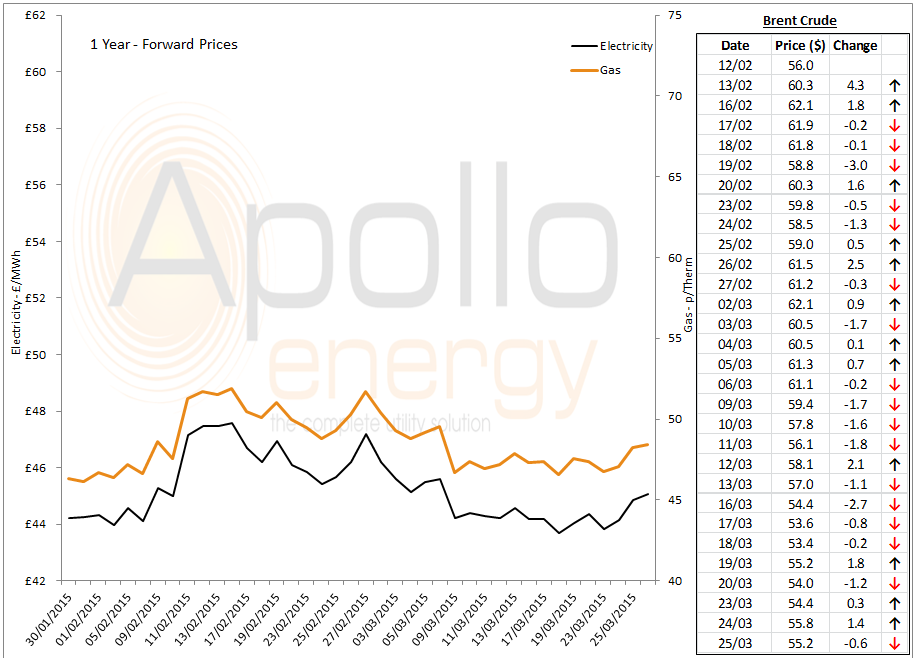 Brent 1st-nearby prices decreased yesterday despite opening at a premium, currently trading slightly above $55/b. This afternoon's outlook is also bearish as today's EIA report is not expected to offer any support.