Spot power prices showed little movement yesterday after opening the session higher. Today prices remain high but some bearish movement could be recorded this afternoon as renewable generation is expected to pick up. Tensions in Ukraine which could severely affect Russian gas supply are the main driver of the gas market at present and prices continue to climb higher. UK LDZ demand has risen this morning but slightly improved flows from Norway have helped towards a long UK gas system. Today's prices can also be found in an easy to read table on our 'current UK energy price' page.

Gas prices moved higher yesterday with the gains more visible on the far curve; Day-Ahead moved just 0.10ppt higher despite a short system and weaker supply. Winter-14 rose by 1.75ppt by the end of the session with other seasonal contracts recorded similar gains. Prompt power contracts saw little change with Day-Ahead and Front-Month failing to take any direction as improved wind generation restricted the bulls. The gains were more prominent further along the curve with Q4-14 increasing by £1.15/MWh and Winter-14 rallied £1.05/MWh higher.

The UK gas system was 4mcm long this morning which has helped Day-ahead to decrease by 0.65ppt. The rest of the near curve also incurred losses as prices took influence from the Ukrainian situation which is still rather volatile. Day-Ahead power rose by £1.05/MWh as wind generation levels are expected to plummet on Monday. Meanwhile, Front-Month shed £0.40/MWh from its price and took influence from its gas counterpart. Further along the curve movement was quite muted with some support offered by strengthening carbon contracts.

Market close data has revealed that the 1-year forward price for both commercial gas & commercial electricity moved higher - closing at 61.73ppt and £52.30/MWh,respectively. This can be seen in the graph below. 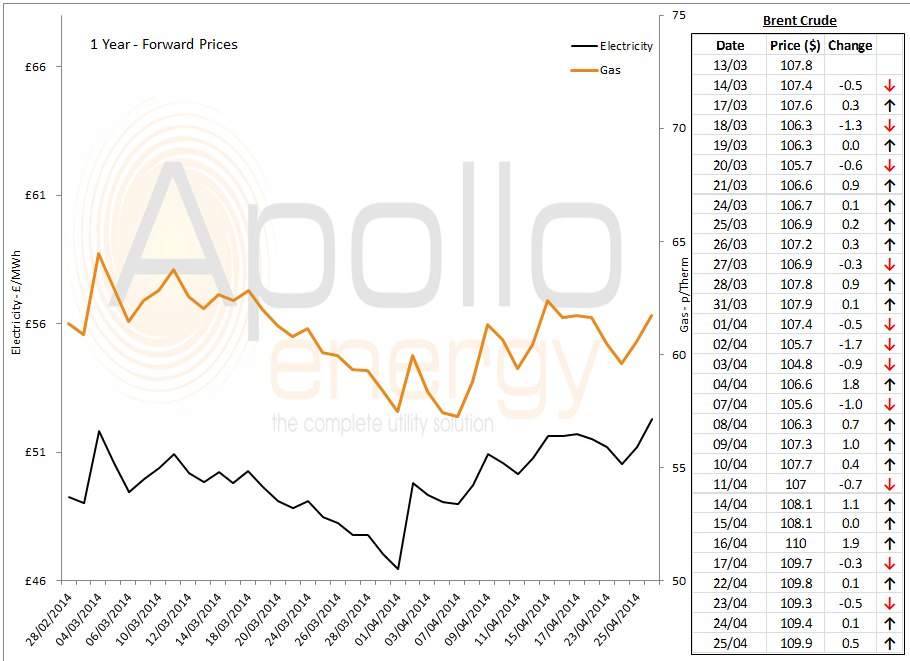 Brent 1st-nearby prices have reached their highest level so far this month and edged just above $110/b with influence coming from the Ukrainian crisis.