Spot prices went up slightly yesterday as wind generation in Germany was expected to decrease this morning. However German wind generation is forecast to return to the high levels of last week tomorrow which will lead to prices turning bearish again.

The gas curve made numerous losses yesterday as Day-Ahead dropped by 0.80ppt, Front-Quarter fell by 0.60ppt and Front-Season shed 0.55ppt from its price. Linepack closed the session short which led to the price drops and weaker Brent also had an effect. The power curve followed a similar trend to gas, Day-Ahead fell by £0.35/MWh and Winter-13 made a loss of £0.55/MWh. The French interconnector returned to full capacity over the weekend which helped prompt prices fall but a 500MW coal-fired plant has had its return date postponed.

Day-Ahead went up to around 60ppt due to an increase in demand and a short system, gains were also seen on the rest of the curve ranging between 0.25ppt and 0.85ppt. Brent strengthened this morning and opened at $101.21/bbl as a number of oil pipelines between Canada and the US are still closed following a spillage. Gas flows also decreased as BBL flows fell to 5mcm which is a drop of 11mcm from yesterday and Langeled flows stood at 15mcm this morning. Wind generation fell by 62GW which has led to its share of the generation mix dropping to just 4%. This led to most power contracts going up with Day-Ahead making a significant gain, opening at £46.50/MWh. The French interconnector is now running at full capacity and increased by 4GW meaning it now holds a 6% share of the generation mix.

Market close data has revealed that the 1-year forward price for both commercial gas & commercial electricity decreased - closing at 67.80ppt and £51.43/MWh, respectively. This can be seen in the graph below. 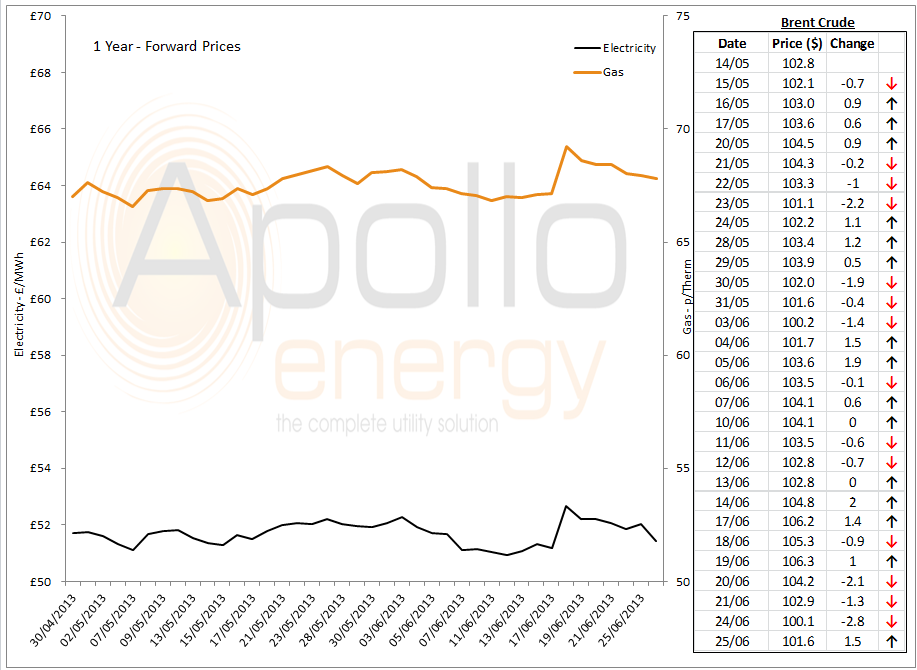 Brent 1st nearby prices hit a low of 99.67 $/b but climbed to 101.16 $/b at closing while the Brent/WTI August-13 spread increased to -5.85 $/b. Three oil pipelines have been shut down following an oil spill between Northern Canada and the US pipeline but this should be resolved within a few days.