Spot power prices moved higher this morning on the back of lower renewable production and stronger gas. However, these gains could be eradicated this afternoon due to improved nuclear availability and warm temperatures. Gas prices followed a bullish trend yesterday on the back of geo-political tensions and ignored strong supply. Today prices have recorded further gains with the Ukrainian situation continuing to worry traders. Today's prices can also be found in an easy to read table on our 'current UK energy price' page.

Prices on the gas curve fluctuated yesterday afternoon due to the on-going volatility in Ukraine. Most contracts ended the session higher with September-14 and October-14 rising by 1ppt, while Q4-14 rose by 1.10ppt despite a long UK gas system. Near-curve power prices displayed gains yesterday with Day-Ahead climbing £0.50/MWh higher and August-14 displaying a £0.40/MWh increase. Front-Month rose to its highest price for 3-weeks due to concerns in regards to gas output; wind generation was also expected to decrease today.

The UK gas system has opened 19mcm long this morning following an increase in Bacton BBL flows. In addition to this healthy supply picture a further 3 LNG deliveries have been scheduled to arrive at the end of this month. Despite this, prices have taken influence from the situation in Eastern Europe and the gas curve opened with a series of gains. Wind generation is expected to fall further tomorrow which helped the bulls seize control of the near-curve. The majority of power prices have opened at a premium although several coal and nuclear plants are expected to return today, providing some downward pressure.

Market close data has revealed that the 1-year forward price for both commercial gas & commercial electricity increased - closing at 56.93ppt and £48.75/MWh,respectively. This can be seen in the graph below. 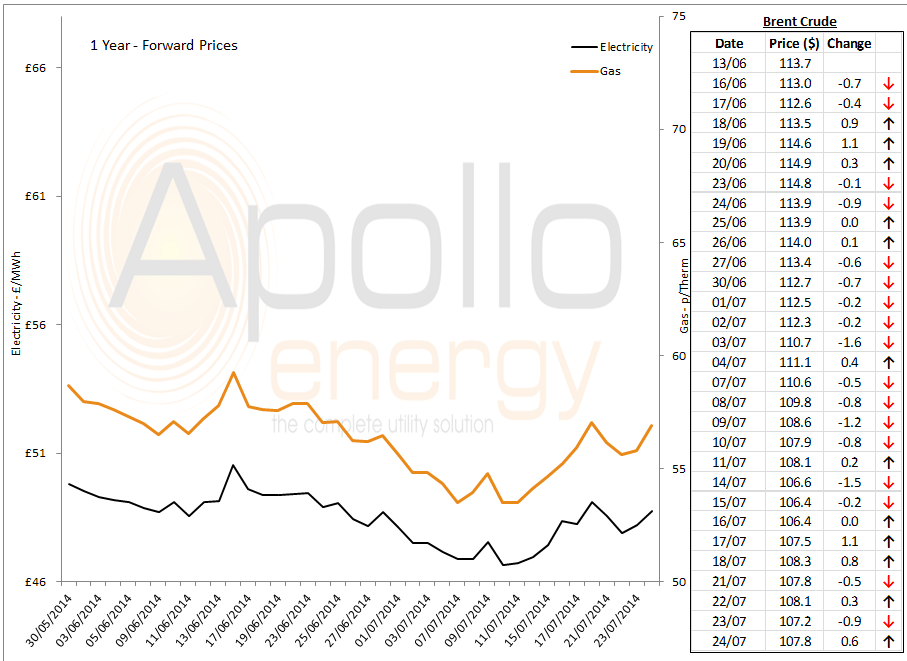 Brent 1st-nearby prices posted gains of around $0.70/b yesterday and remain above $108/b. WTI also moved $1/b higher with bullish EIA report figures the main driver of prices as well as positive manufacturing data from China.