Spot power prices continued to climb higher with impetus coming from a drop in renewable production and nuclear availability, as well as the current Ukrainian situation. Movement over the weekend is expected to be stable with perhaps some slightly bearish movement if tensions in Eastern Europe are eased. Gas prices rose yesterday despite low demand and healthy supply as fears over reduced output from Russia drove the market. Weaker fundamentals could see prices fall this afternoon but the decrease could be a temporary one. Today's prices can also be found in an easy to read table on our 'current UK energy price' page.

Gas prices showed mixed movement yesterday with various reports coming from a European Union meeting throughout the day. Near-curve prices climbed higher in the afternoon with September-14 and Q4-14 recording the largest gains. The general supply picture remains very healthy but the UK gas system became short for the first time in 3 days. Most power prices closed at a premium yesterday with Day-Ahead adding £0.40/MWh to its price and August-14 rising by £0.65/MWh. Front-Month and Quarterly contracts also firmed and followed their gas counterparts with support coming from stronger Brent.

Gas prices displayed further upward movement this morning as Day-Ahead moved over 1ppt higher, helped by strong economic growth in the UK. Front-Month increased by 0.60ppt, while seasonal contracts opened with mixed movement. Send-outs from the South Hook facility were higher this morning but despite this the UK gas system opened 9mcm short. There was very little movement at the start of today's trading session and an uptick in prices only began to occur mid-morning. Day-Ahead followed gas and ignored an improved wind generation forecast for Monday. August-14 and October-14 were the morning's biggest movers, adding 0.65ppt and 0.60ppt, respectively.

Market close data has revealed that the 1-year forward price for both commercial gas & commercial electricity increased - closing at 57.56ppt and £49.35/MWh,respectively. This can be seen in the graph below. 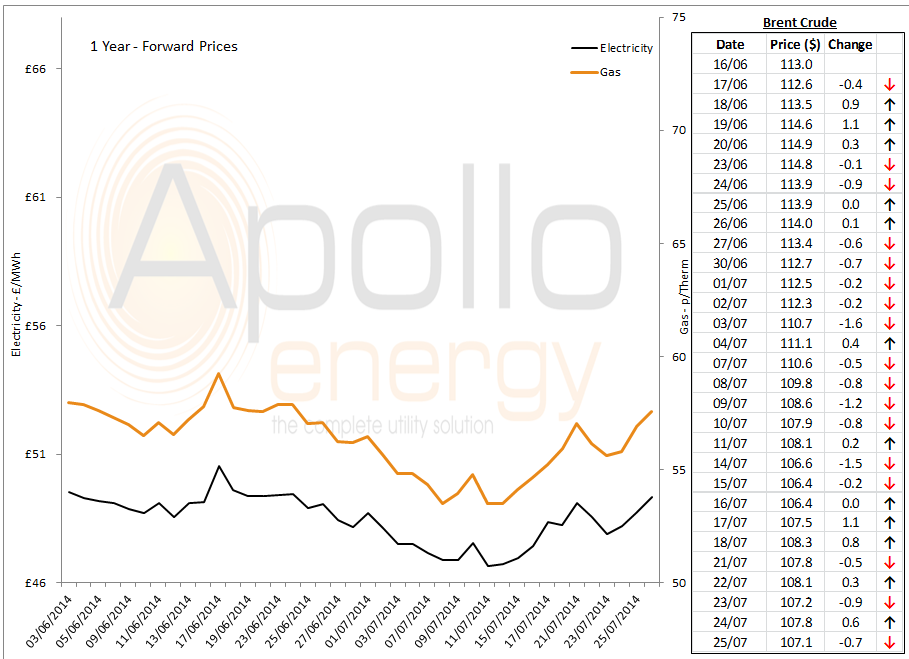 Brent 1st-nearby and WTI prices fell by almost $1/b yesterday and the spread currently stands at -$5/b. Political tensions continue to provide support to the bulls but an increase in Libyan supply has restricted the upward movement.