Spot power prices have moved down this morning as consumption levels are forecast to be slightly lower this week, while the supply picture is also healthy due to minimal issues at power facilities. Gas prices were bearish on Friday following a rise in Norwegian supply and improved production in Holland. Numerous outages occurred in Norway over the weekend but exports into the UK continued to rise this morning resulting in an over-supplied system and weaker prices. Today's prices can also be found in an easy to read table on our 'current UK energy price' page.

Numerous losses were posted on the gas curve on Friday as Norwegian supply ramped up which resulted in a comfortable system. Norwegian imports into the UK averaged 80mcm during the session, considerably higher than in previous weeks. Elsewhere, an outage at the Rough storage facility also reduced storage injections to 11mcm, further improving supply. Stronger demand offered some support to near-curve contracts but consumption was expected to drop by 10mcm today which helped the prompt to decrease. Power prices closed at a discount on Friday with direction coming from falling gas and a cooler weather forecast which is expected to lead to decreased demand levels. Meanwhile, another significant drop in oil prices provided bearish pressure on the far-curve.

Norwegian imports into the UK have risen again this morning and have contributed to a healthy supply picture. Demand levels are expected to display another small drop tomorrow, while weaker fuel prices continue to weigh on some far-curve contracts. Most power contracts have displayed small decreases this morning on the back of comfortable generation and weaker fuel prices. Temperatures remain below average which has reduced cooling demand across the UK, contributing to some losses on the near-curve.

Market close data has revealed that the 1-year forward price for both commercial gas & commercial electricity decreased - closing at 43.98ppt and £43.45/MWh, respectively. This can be seen in the graph below. 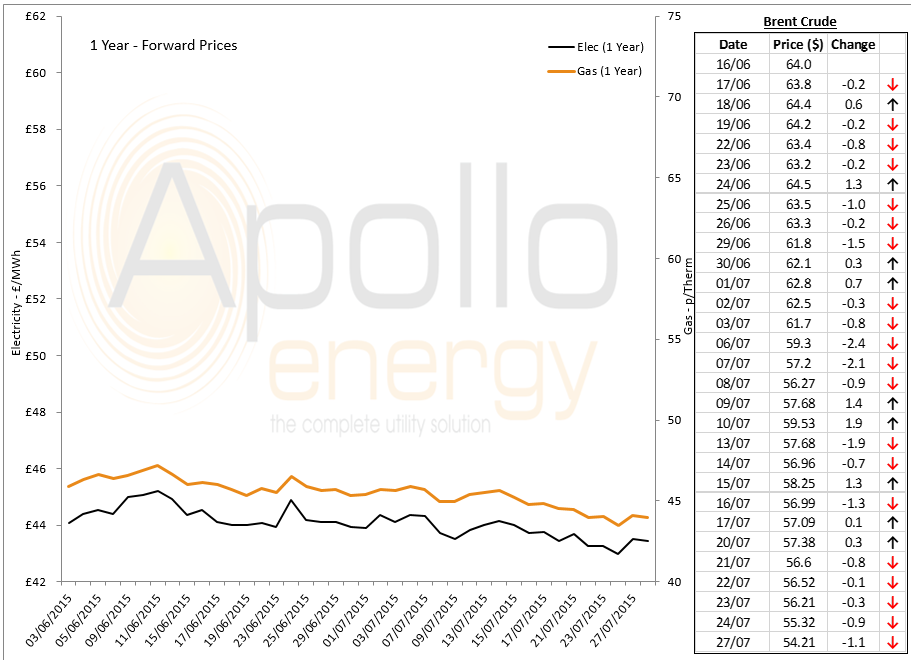 Brent 1st-nearby prices decreased once again during Friday's session and displayed a significant loss over the course of last week as higher US rig counts did nothing to ease oversupply worries.