The spot power market has taken influence from ample supply levels and reduced demand. Nuclear availability has improved over the last seven days and hydro & wind production has also increased. The UK gas system was comfortable yesterday with the help of stronger Norwegian supply levels, which helped prices to fall. Today UK LDZ demand is expected to decrease by around 12mcm while Norwegian supply continues to improve, therefore November-13 prices should move down. Today's prices can also be found in an easy to read table on our 'current UK energy price' page.

Most gas contracts shed from their price yesterday with Day-Ahead falling on the back of the usual drop in demand on Fridays. Norwegian flows ramped up with the BBL pipeline returning online and flowing at a rate of 28mcm. Seasonal contracts were also bearish despite the British Pound weakening against the Euro. Day-Ahead power opened at a premium yesterday with lower wind generation the main factor for this as more expensive gas-generation was required to meet demand. Further along the curve contracts took influence from their gas counterparts and made losses despite higher APi2 coal and carbon allowance prices. Front-Month hit a 3-month low as demand levels are currently below the seasonal average as temperatures remain relatively mild.

Day-Ahead gas climbed 1.55ppt higher due to the usual Monday demand premium, while restrictions on capacity at Dunkirk were lifted which led to an increase in flows via the Franpipe. Meanwhile the Pound continued to weaken against the Euro which led to bullish tension on the far-curve. Power prices climbed higher this morning with Day-Ahead adding £0.50/MWh to its price as a result of weaker wind generation. Further along the curve the weaker Pound and higher APi2 coal prices helped contracts turn bullish. November-13 has also moved up after reaching a three week low yesterday.

Market close data has revealed that the 1-year forward price for commercial gas fell slightly while commercial electricity made a small gain - closing at 66.71ppt and £52.30/MWh, respectively. This can be seen in the graph below. 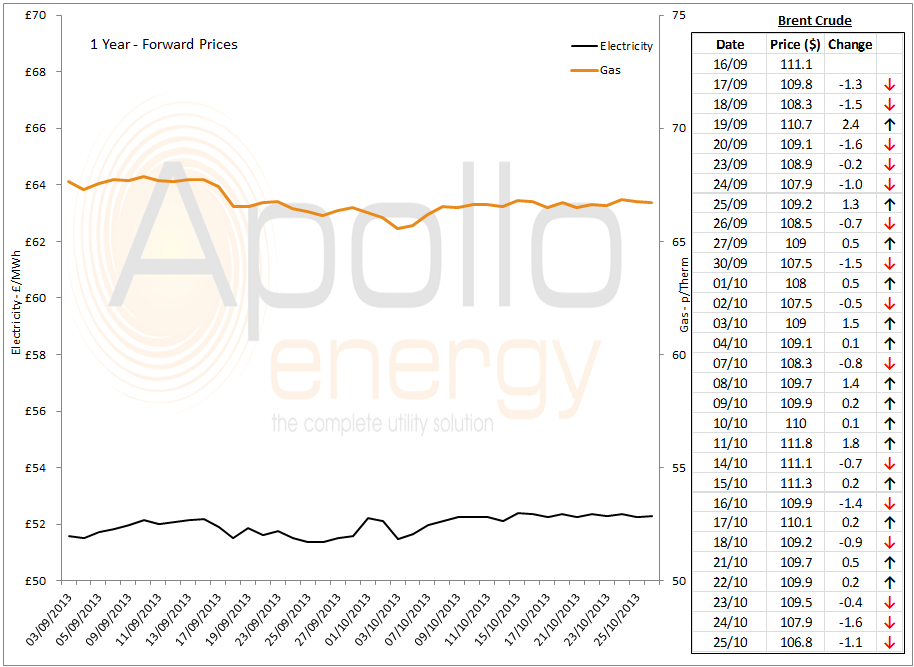 Brent fell by $0.80/b yesterday and is currently at its lowest price since June. WTI also fell and ended the day at $97/b; the Brent/ WTI spread currently stands at -$10/b. The conclusion of maintenance at a number of US refineries helped oil prices move down which were also assisted by a weaker economic outlook.