Spot power prices are showing little movement at present due to mixed fundamentals. Numerous outages at power plants and weaker wind generation will provide bullish support but a mild weather forecast means demand levels will remain low; little movement is expected this afternoon as a result. Gas prices moved down on Friday as the UK gas system was well-supplied and demand levels were low as a result of warmer weather. The mild weather is forecast to continue this week and UK LDZ demand is expected to be 24% below the seasonal norm; further losses should occur this afternoon. Today's prices can also be found in an easy to read table on our 'current UK energy price' page.

Gas prices moved down on Friday as a mild weather outlook for the weekend weighed on the near-curve. Day-Ahead ended the session at 42.35ppt as weak demand and healthy storage levels helped the bears take control. Some power prices on the far-curve moved higher on Friday and were influenced by stronger carbon contracts. However, the majority of contracts shed from their value as low demand levels were anticipated for the weekend.

Gas prices showed little change this morning with Summer-16 the biggest mover on the near-curve, adding 0.25ppt to its price. Overall gas flows have fallen by 28mcm as Langeled output has dropped by 12mcm and South Hook is down by 8mcm. However, the UK gas system remains balanced as demand levels are below average. Power prices are following a similar trend to gas and movement on the curve was largely subdued this morning. Day-Ahead fell by £0.25/MWh despite an expected drop in wind generation tomorrow, with levels forecast to be around 2GW. The prompt took direction from continued mild weather and the return of some nuclear power units.

Market close data has revealed that the 1-year forward price for commercial gas both commercial electricity climbed increased slightly - closing at 56.43ppt and £50.80/MWh, respectively. This can be seen in the graph below. 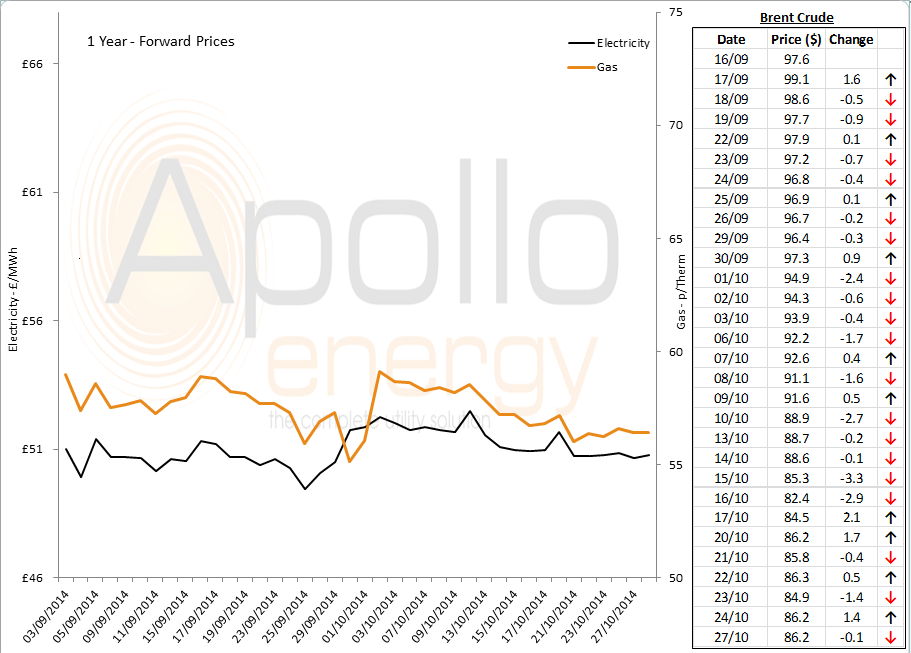 Brent 1st-nearby prices remain around $86/b this morning with prices range-bound between $87/b and $84/b for the past 10 days. No major movement is expected today with the outlook mainly focusing on economic situations in various countries.