Some spot power prices moved down on Friday due to the expected mild weather over the weekend which reduced demand, the bears were also supported by healthy supply. A rise in demand today and an expected drop in temperatures next week have supported prices this morning and further gains could occur this afternoon. Gas prices increased on Friday due to the on-going outage at the Norwegian Troll field which is expected to remain offline until the 11th December. A slight drop in temperatures has helped prices to rise again this morning and further upward movement can be expected. Today's prices can also be found in an easy to read table on our 'current UK energy price' page.

Gas prices closed Friday's session at a premium on the back of short supply due to the outage at a major gas field in Norway. Further along the curve some contracts were influenced by strengthening oil prices. Power prices displayed numerous gains on Friday although some contracts were restricted by a low demand forecast for the weekend. Rising gas and fuel prices provided some support to the far curve as did the expectancy of colder weather in the coming weeks.

Gas prices have climbed higher this morning as temperatures in the UK are set to drop below average this week. Q1-15 has rallied higher as the Norwegian Troll gas field will remain offline until the second week of December; possibly leading to an increase in UK storage withdrawals. Meanwhile, some downward pressure was provided by three scheduled LNG deliveries which should arrive before the end of the month. Power prices continue on an upward trend this morning and have taken direction from stronger gas contracts and weak wind generation. Stronger demand levels are also expected this week as slightly colder weather is set to creep in.

Market close data has revealed that the 1-year forward price for both commercial gas & commercial electricity increased - closing at 56.93ppt and £51.15/MWh, respectively. This can be seen in the graph below. 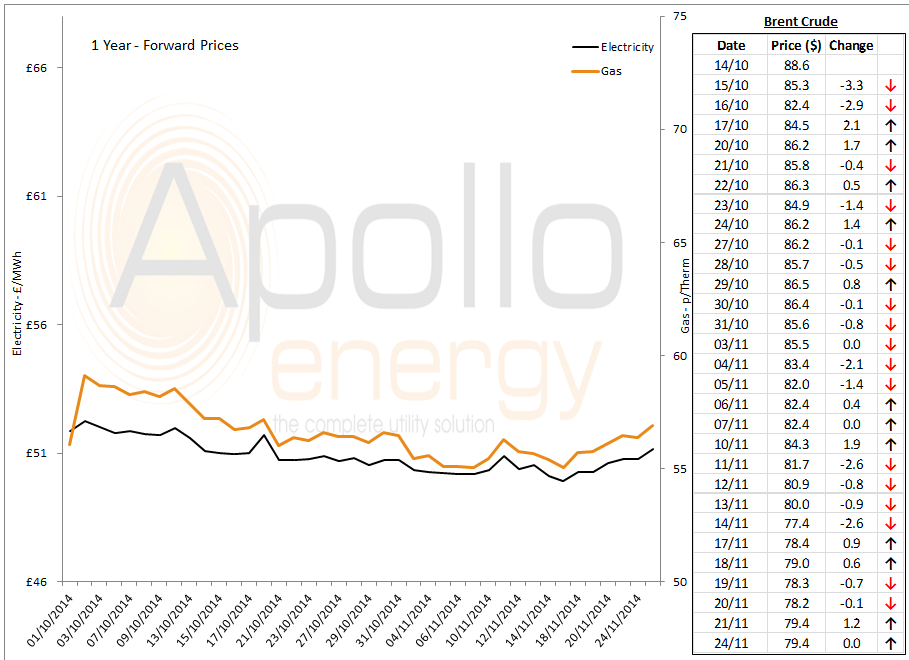 Brent 1st-nearby prices stabilised over the weekend and remain just below $80/b this morning as positive economic data from China offset an expectation of OPEC production cuts.