There is no additional pressure on spot power prices this morning as temperatures in the UK are expected to be around the average for this time of year tomorrow. Meanwhile, renewable and thermal production on the continent is comfortable; prices could stabilise this afternoon as a result. Colder weather yesterday led to a rise in UK gas demand which in turn pushed prices higher. The UK gas system has opened balanced this morning despite above average demand levels, however, temperatures are expected to be milder tomorrow and overall gas flows are improving. Despite this healthier supply picture in the UK, stronger consumption levels in Europe could help prices maintain their bullish trend. Today's prices can also be found in an easy to read table on our 'current UK energy price' page.

Gas contracts increased on Monday's session on the back of colder weather which pushed demand levels higher. The UK gas system was short for the majority of the day with a drop in Norwegian imports also a factor. Power prices also displayed upward movement yesterday but the gains were less prominent than the ones seen on the gas curve. Wind production is expected to remain low for the rest of the week which helped to support the near-curve while stronger fuel prices helped contracts further out climb higher.

The UK gas system opened 2mcm long this morning following a rise in overall production, with the Rough storage facility increasing its output to around 37mcm. Compared to last Tuesday demand levels have grown by 50mcm on the back of cold temperatures. Some contracts have increased by as much as 0.90ppt this morning on the back of this strong demand. Day-Ahead power opened at a premium yet again this morning as low wind generation and colder weather drove the prompt higher. The rest of the curve ignored strengthening Brent and gas prices with January-15 displaying a sizeable loss.

Market close data has revealed that the 1-year forward price for both commercial gas & commercial electricity increased - closing at 57.65ppt and £51.58/MWh, respectively. This can be seen in the graph below. 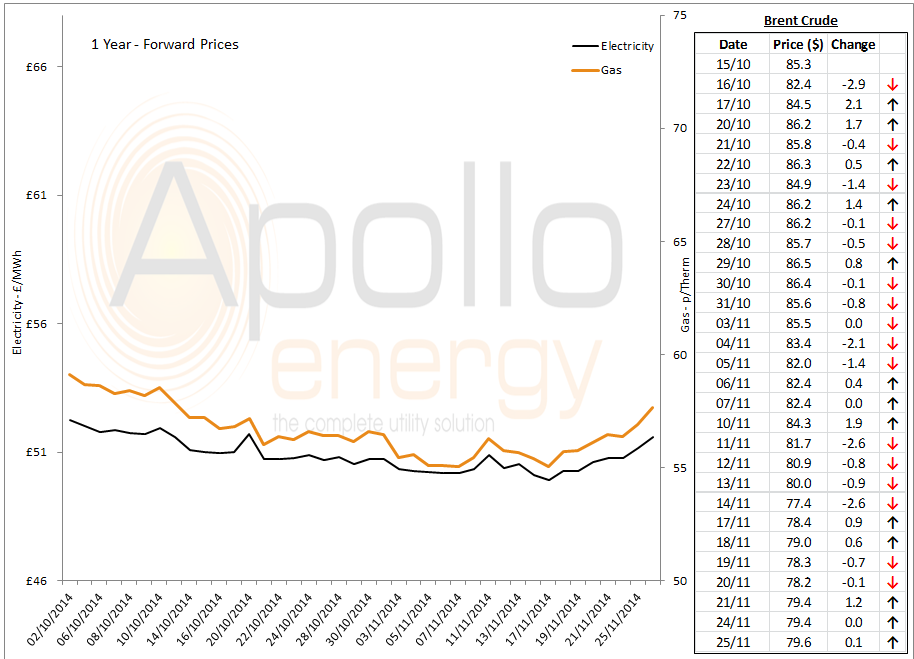 Brent 1st-nearby prices show very little movement at present and are not currently supported by on-going talks regarding the Iranian nuclear programme. Brent recorded gains yesterday morning but decreased in the afternoon and trades below $80/b once again.