Spot power prices moved higher on Friday as wind generation levels were expected to fall today. Prices are expected to be stable this afternoon as lower demand has offset weaker renewable generation and climbing carbon contracts. Gas prices took a downward direction at the end of last week although the current Ukrainian crisis offered some support to the bulls. Demand levels in the UK have risen this morning which has helped prompt prices to record further gains and supply worries in Eastern Europe should push prices higher later today. Today's prices can also be found in an easy to read table on our 'current UK energy price' page.

The majority of gas contracts closed at a premium on Friday as political tensions in Eastern Europe was the main driver of prices. Front-Quarter strengthened by 0.55pt, while Front-Season increased by 0.20ppt. Storage levels are currently 60% full and further LNG deliveries are expected in the coming weeks. Day-Ahead power displayed a gain of £0.20/MWh on Friday as wind generation levels were expected to fall today, while support also came from reduced nuclear production. Movement on the rest of the curve varied as June-14 fell by £0.45/MWh and some contracts moved slightly higher.

The gas curve saw further upward movement this morning with Day-Ahead adding 0.50ppt to its price and seasonal contracts rose by as much as 0.80ppt; the Ukrainian crisis continues to influence the market. The UK gas system opened at 2mcm long as Langeled flows have improved, while 4 LNG deliveries have been scheduled for next week. Most power prices followed a similar trend to gas although some opened unchanged, which included Q3-14. Day-ahead recorded the largest gain this morning and opened at a £0.90/MWh premium as wind production is expected to be low this week.

Market close data has revealed that the 1-year forward price for both commercial gas & commercial electricity made small losses - closing at 62.15ppt and £52.18/MWh,respectively. This can be seen in the graph below. 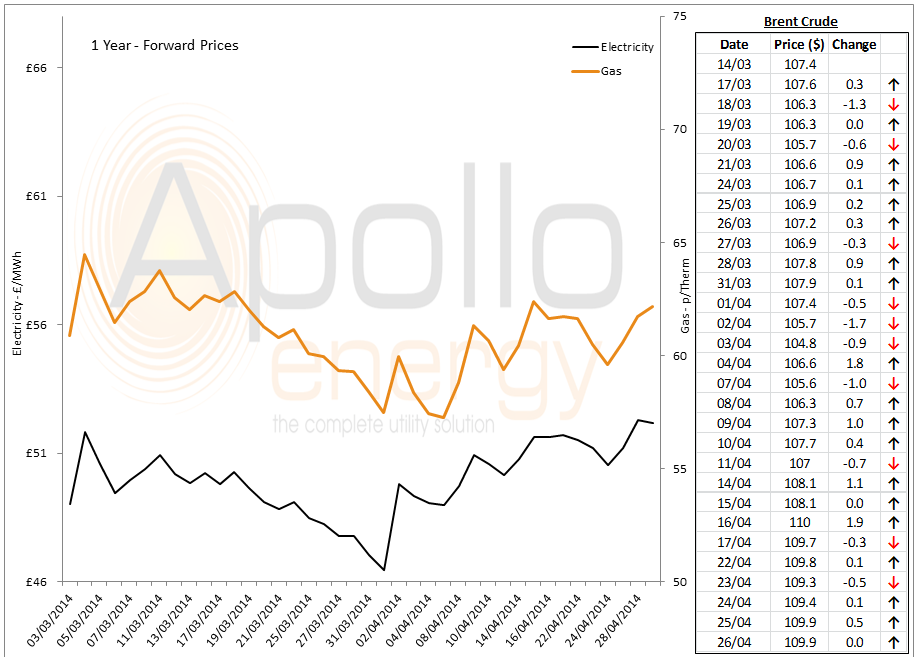 Brent 1st-nearby prices remain above $109/b this morning with support coming from tensions in Ukraine. Meanwhile, WTI is currently trading at around $101/b which has taken the Brent/ WTI spread to -$8.7/b.