There was little movement on the gas curve yesterday; Day-Ahead was the contract to make the most significant move as it added 2.00ppt to its price. The system remained short for most of the day which caused Day-Ahead to add to its price and resulted in most near curve contracts posting gains between 0.05ppt to 0.15ppt. Brent increased in price but this failed to have much impact on the far curve as Winter-13 and Summer-14 saw no change. The power curve saw even less movement as Front-Month added £0.10/MWh and Front-Quarter lost £0.05/MWh. Further along the curve, seasonal contracts made similar movements to their gas counterparts as Winter-13 and Summer-13 received support from stronger coal prices.

Day-Ahead made a gain of 0.90ppt as the interconnector is expected to return online tomorrow which will increase demand and most likely lead to a short system. However most NBP contracts made a loss today as the system opened 14mcm long as a result of improved flows from the South Hook Terminal and the Bacton BBL. Winter-14 went up by 0.45ppt despite the Brent Crude price weakening. The power curve displayed no real direction as Day-Ahead made a gain of £1.90/MWh as a consequence of lower than average wind generation forecast for the rest of the week. July-13 dropped by $0.10/MWh as its Brent counterpart lost $0.36/bbl while the rest of the monthly contracts went up. On the far curve the majority of seasonal contracts increased along with EUA contracts.

Market close data has revealed that the 1-year forward price for both commercial gas & commercial electricity decreased - closing at 67.56ppt and £51.38/MWh, respectively. This can be seen in the graph below. 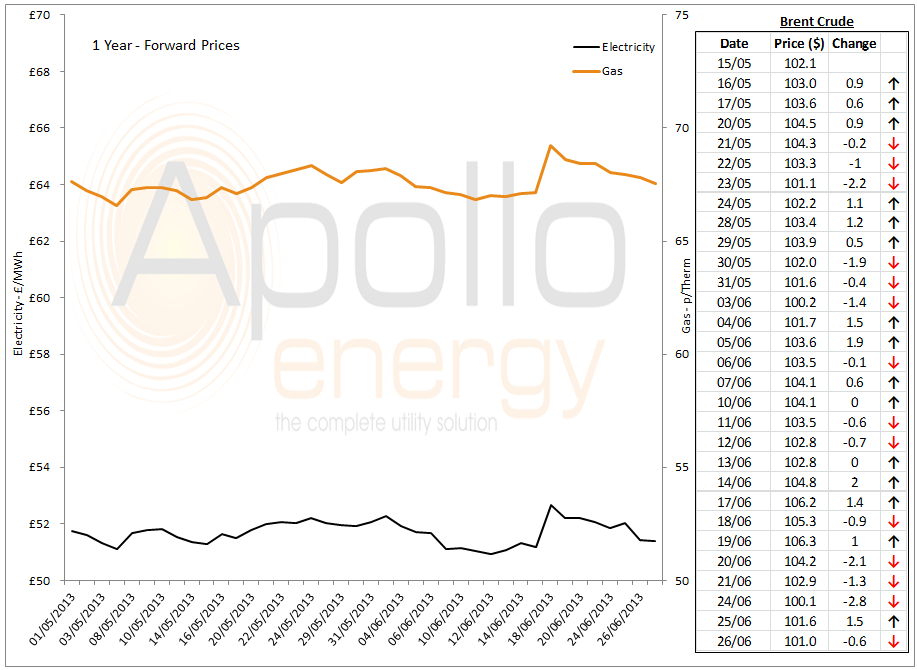 Brent 1st nearby prices saw little change yesterday but made a slight loss this morning. A bearish API report could have an effect on prices but there is no clear forecast at present. Crude imports were up by 0.6MB/d, Crude runs added 0.45Mb/d and Cushing crude inventories increased by 0.7Mb. A section of the oil pipeline in Canada that was shut down after a spillage has reopened and it is thought the other lines could return as early as today.