Spot power prices climbed higher on Friday due to a drop in wind and solar production. However, nuclear availability was rather healthy and helped to limit the gains somewhat. Today, numerous outages at power plants have helped to push prices higher although warm temperatures resulting in low demand has restricted the bulls. European gas demand was slightly higher on Friday which led to an increase in prices, with the situation in Ukraine also providing some upward pressure. The UK gas system is well-supplied this morning which has helped contracts move down, with a stable outlook forecast for this afternoon. Today's prices can also be found in an easy to read table on our 'current UK energy price' page.

Gains were observed across the curve on Friday with Winter-14 climbing above 60ppt as traders took direction from the tensions in Ukraine. The UK gas system remained short throughout the session following a drop in Bacton BBL flows which helped push near-curve prices higher. Power contracts followed their gas counterparts but the gains were less prominent, bullish influence was also provided by stronger Brent. A number of power units were expected to be taken offline over the weekend for maintenance which supported the bulls further.

Gas prices have moved down this morning as concerns regarding Russian/ Ukrainian supply have eased, with further impetus coming from a long UK gas system. Day-Ahead decreased by 1.85ppt and fell back below 40ppt as a result of the healthy supply picture. Losses were also observed further along the curve with seasonal contracts falling by as much as 0.90ppt. Day-Ahead power fell by £0.40/MWh this morning as wind generation levels are expected to improve significantly today and tomorrow. On the far-curve, August-14 ended its cycle at £37.80/MWh and the new front-month, September-14 began trading at £38.00/MWh.

Market close data has revealed that the 1-year forward price for commercial gas moved down while commercial electricity increased - closing at 57.21ppt and £49.75/MWh,respectively. This can be seen in the graph below. 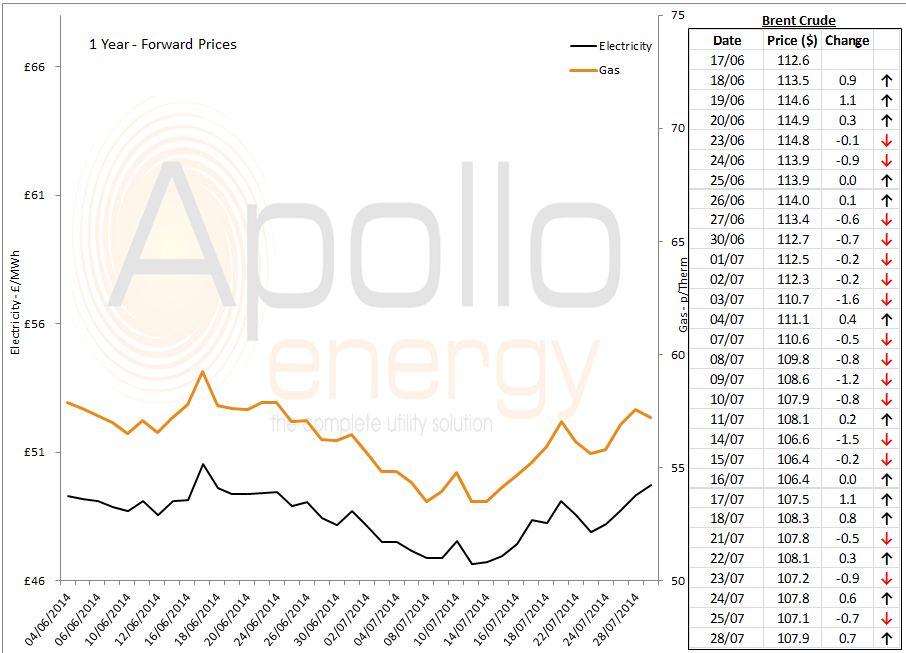 Brent 1st-nearby prices climbed $1/b higher on Friday and currently trade at around $108/b. Meanwhile, WTI trades below $102/b and the Brent/ WTI spread now stands at $6.2/b.