Spot power prices increased on Tuesday as demand levels climbed higher and renewable generation was expected to weaken on the continent, with further support coming from stronger gas. The supply/ demand picture is generally unchanged today and further upward movement on the gas curve has supported power contracts.

Gas prices moved higher yesterday and corrected last week's significant losses on the back of a stronger European stock market, following an economic collapse in China. Maintenance at the Kollsnes facility has reduced Norwegian imports into the UK by 27mcm, resulting in a short UK gas system, pushing prices higher.

Gas prices rebounded on Tuesday and cancelled out some of the losses which were recorded last week. A drop in Norwegian flows helped to support prices on the near-curve, with imports falling by 17mcm; exports to Belgium also increased, further reducing supply. The economic situation in China eased later in the session which helped Brent move higher, which in turn supported prices further along the curve.

Power prices also inched higher with influence coming from stronger gas, oil and coal contracts. Winter-15 & 16 both added £0.17/MWh to their price, while the prompt was the exception to the upward movement, falling by £0.95/MWh as renewable generation was healthy.

Gas prices continue to display a bullish outlook this morning as Norwegian supply has decreased further due to maintenance at the Kollsnes processing plant. The UK gas system was undersupplied this morning as Belgium exports remain high and demand levels are around the seasonal norm.

Power prices are still dictated by gas and small gains are evident across the curve, with stronger fuel providing additional support. Wind and solar generation remains healthy in the UK but the Day-Ahead contract managed to post an increase of £0.20/MWh.

Market close data has revealed that the 1-year forward price for both commercial gas & commercial electricity increased - closing at 41.89ppt and £42.25/MWh, respectively. This can be seen in the graph below. 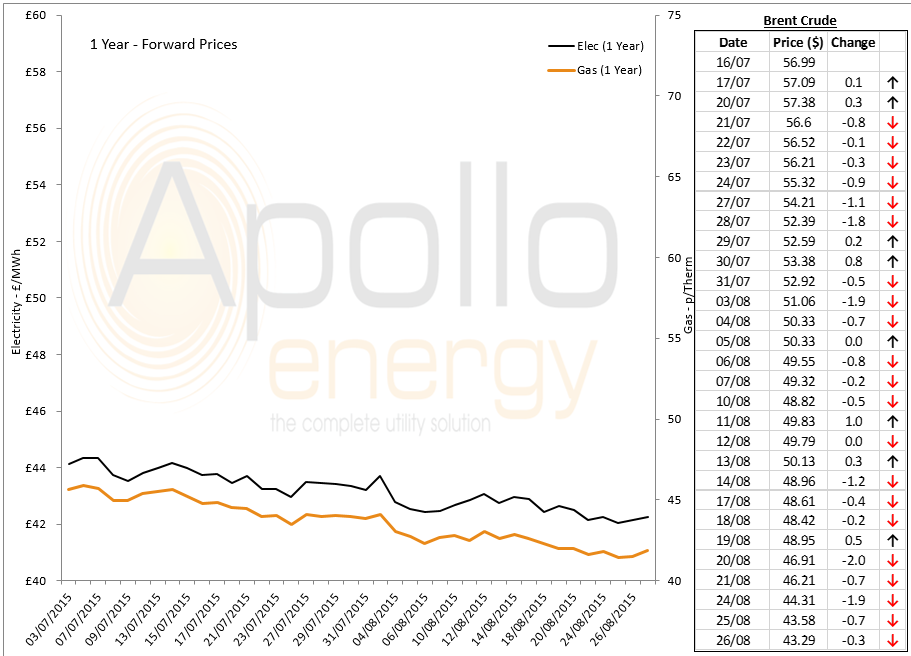 Brent 1st-nearby prices have stabilised this morning as China has given reassurances in regards to their economic position which provided a boost to the stock market.