Spot prices made a sizeable loss over the weekend due to improved wind production on the continent. Lithuania, the current holder of the EU Presidency has also given support for carbon backloading along with Germany which has also affected prices. A colder weather forecast for this week helped NBP prices on the far-curve increase on Friday however prompt prices held firm as temperatures could turn mild again at the beginning of November. UK LDZ demand has increased by around 29mcm today but the supply outlook is also much improved when compared to Friday which should limit the amount of storage withdrawals required. As a result Day-Ahead is expected to climb higher but November-13 prices could weaken. Today's prices can also be found in an easy to read table on our 'current UK energy price' page.

Gas prices were rather bullish at the start of Friday's session as Day-Ahead opened around 66.8ppt due to colder temperatures. However Day-Ahead fell by 1.85ppt later in the day thanks to a comfortable UK gas system while Brent also remained below $107/b. There was also an increase in imports via the Zeebrugge pipeline as the ZB/NBP spread stands just over 1ppt. Further along the curve prices displayed little change with seasonal contracts dropping by 0.05ppt on average. November-13 ended its cycle at £52.50/MWh after making a loss of £0.50/MWh on Friday. Losses were observed across the gas curve due to a weaker coal market with Front-Month APi2 coal shedding $1/tn from its price. Day-Ahead closed at a £0.15/MWh premium due to a drop in temperatures while the system buy price climbed to just under £100/MWh.

Day-Ahead gas opened with a 1.35ppt loss this morning as the system started the session 22mcm long. Langeled flows were around 42mcm while storage levels reached 98% full which both added to the comfortable system. Front-Month Brent climbed to £107/bbl due to stronger economic growth although this failed to have any effect on NBP prices. Peak demand for tomorrow was forecast to be close to today's levels of 48.3GW which has led to Day-Ahead decreasing by £1.80/MWh, the bears were also assisted by higher wind availability. CCGT generation fell by 10% after reaching 26% on Friday while wind generation increased its share of the generation mix to 12%.

Market close data has revealed that the 1-year forward price for both commercial gas & commercial electricity fell slightly - closing at 66.65ppt and £52.28/MWh, respectively. This can be seen in the graph below. 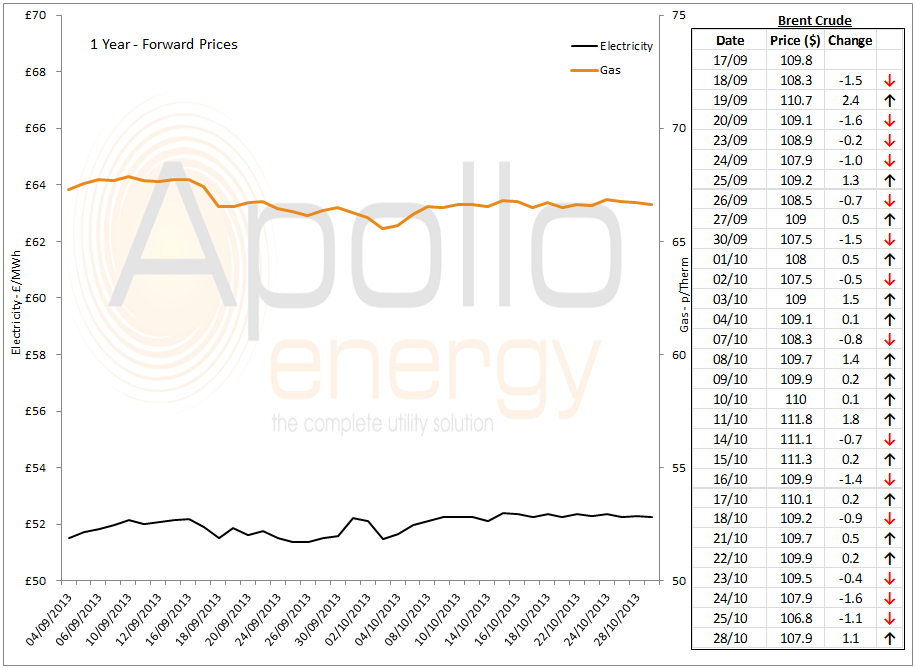 Brent and WTI fell by around $3/b last week due to continued supply issues and less positive economic data. Brent ended Friday's session at $107/b while WTI remained below $98/b and the WTI spread currently stands at -$9.5/b this morning.