A drop in wind and nuclear generation in addition to lower than average temperatures led to spot prices making significant gains yesterday. However prices further along the power curve moved down on the back of weaker carbon and coal prices. An unplanned outage at a Norwegian gas field yesterday resulted in a sharp decrease in flows to the UK and combined with higher demand levels the system was tight for most of the day; this resulted in gas prices going up. Today UK LDZ demand is at the same level as yesterday and is currently 12.2% above the seasonal average. Slightly milder weather is expected for tomorrow which should see residential demand fall, while Norwegian flows have also improved which should see prices drop. Today's prices can also be found in an easy to read table on our 'current UK energy price' page.

Gas contracts across the curve displayed gains yesterday with the sharper increases occurring on the near-curve. Front-Month registered the largest gain of 0.30ppt while Front-Season closed 0.05ppt higher. Rough and Holford flows increased later in the afternoon which led to a rise in storage withdrawals. Stronger Brent also helped the bulls take control of the curve as did the British Pound weakening against the Euro. Day-Ahead and Front-Month power both ended yesterday's session unchanged while the rest of the curve made small losses ranging from £0.05/MWh to £0.15/MWh. The main driver of the market was weaker Front-Month APi2 coal although the price-drops were limited by climbing Brent.

Day-Ahead gas opened today's session slightly lower but has now made up this deficit, currently trading unchanged from yesterday's closing price. Most contracts on the Near-Curve made gains with December-13 climbing 0.30ppt higher. Gas flows have ramped up as twice as many storage withdrawals have taken place today with Rough and Holford flowing at a rate of around 40mcm combined. Some seasonal contracts were supported by stronger Brent and flows via both interconnectors were also reduced, adding to the bullish tension. Numerous coal-fired plants suffered unexpected outages including the 500MW Fiddler's Ferry facility. These outages meant that more expensive gas-fired generation was required to meet demand and in turn led to near-curve contracts opening at a premium. Gas-fired generation is currently at its highest level for five months (over 300GW) as wind production is currently low.

Market close data has revealed that the 1-year forward price for both commercial gas & commercial electricity went up - closing at 67.55ppt and £52.60/MWh, respectively. This can be seen in the graph below. 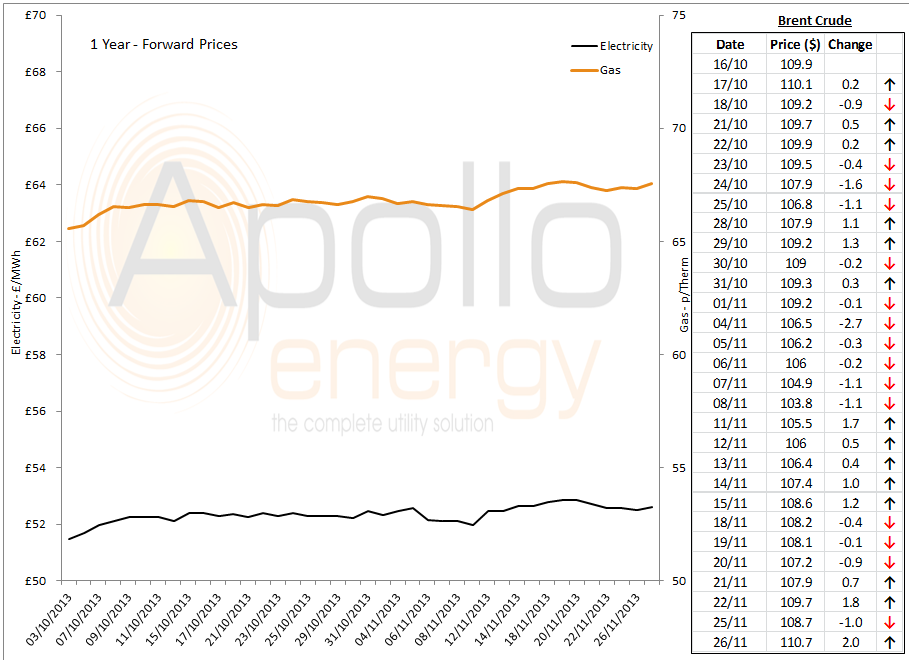 Brent 1st-nearby prices were practically unchanged yesterday as prices rebounded after making a substantial loss earlier in the day. Today prices remain around $111/b as the Iranian nuclear agreement is yet to have a significant impact on the market.