Spot power prices have recorded significant gains this week and look set to continue increasing today. A higher level of demand as a result of colder weather is the main market driver, with strengthening coal and carbon also a factor. Rising demand led to short gas systems in numerous European countries yesterday with demand levels in the UK reaching a 10-month high. The UK gas system has opened 36mcm short this morning as overall gas flows are lower which should lead to further gains. Today's prices can also be found in an easy to read table on our 'current UK energy price' page.

Strong upward movement was recorded on Tuesday on the back of extremely strong demand levels which almost reached a one-year high. Overall gas flows were also down as already weak Norwegian flows were further impacted by an outage at the Asgard facility. Power prices followed their gas counterparts yesterday with high demand levels dictating the energy market. Further along the curve some contracts also found support from rising Brent and coal.

The UK gas system has opened short once again today and storage withdrawals from the Rough facility have begun; gains were displayed across the curve as a result. Front-Month gas also continues to trade higher than the Day-Ahead contract which could lead a further increase in storage withdrawals. Nuclear availability and wind production remains low which has added to power's bullish trend with the gains more visible on the near-curve. Further out some contracts took direction from rising APi2 coal prices and stronger carbon emission allowances.

Market close data has revealed that the 1-year forward price for both commercial gas & commercial electricity increased - closing at 58.95ppt and £52.33/MWh, respectively. This can be seen in the graph below. 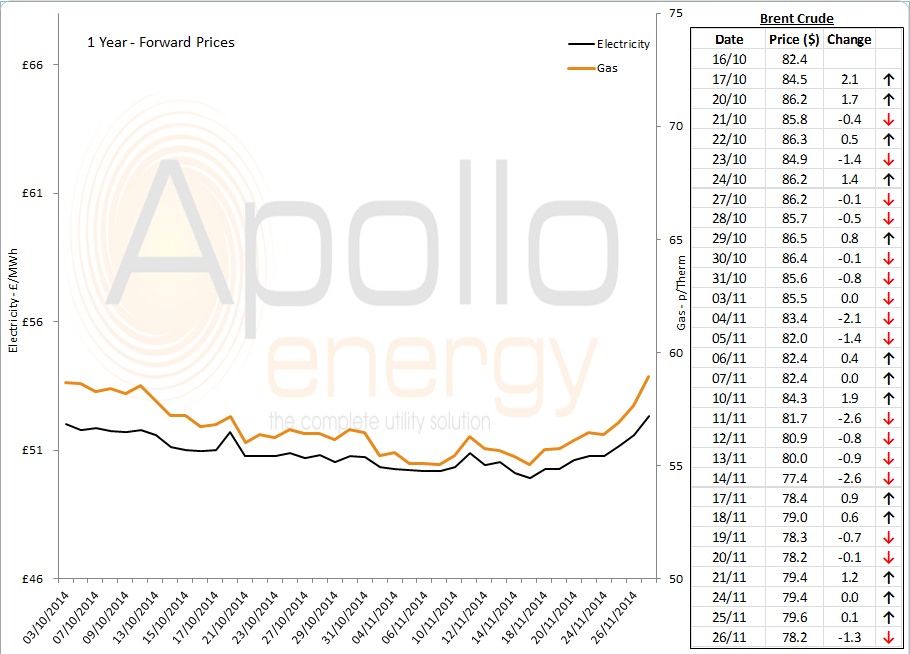 Brent 1st-nearby prices recorded losses yesterday following a meeting in Vienna regarding OPEC oil cuts. No agreement was reached which traders deemed to be bad news and prices were corrected down as a result.