Spot power prices are currently following a slightly bullish trend at present with higher demand, as a result of colder weather leading to small gains for numerous contracts. However, a downward correction is expected this afternoon as generation levels are healthy. Gas prices moved down on Friday as the UK gas system opened long once again, as demand levels decreased and supply remained strong. Norwegian output has been reduced this morning due to an outage at the Troll gas field, while increased tensions in Ukraine have also provided support; upward movement is likely. Today's prices can also be found in an easy to read table on our 'current UK energy price' page.

Overall gas flows were strong on Friday, while demand levels were also lower than previous days which led to bearish movement across the curve. The arrival of LNG deliveries and strong production in Norway led to a long UK gas system. Near-curve power prices moved down on Friday as wind generation was expected to maintain strong levels over the weekend and demand levels were reduced. The majority of contracts followed their gas counterparts with no clear trend visible.

Gas prices displayed mixed movement this morning with Day-Ahead and Front-Month contracts opening at a premium and the rest of the curve recording losses or opening unchanged. Overall gas flows are down by 55mcm which offered support to the near-curve and there are no LNG deliveries currently scheduled. Power prices also varied in their movement with the prompt contract climbing higher and far-curve contracts weakening. Wind generation is expected to fall by 1GW tomorrow which pushed the Day-Ahead contract higher. Meanwhile, weaker coal and oil helped to weigh on contracts further out.

Market close data has revealed that the 1-year forward price for commercial gas decreased while commercial electricity moved higher- closing at 45.30ppt and £43.95/MWh, respectively. This can be seen in the graph below. 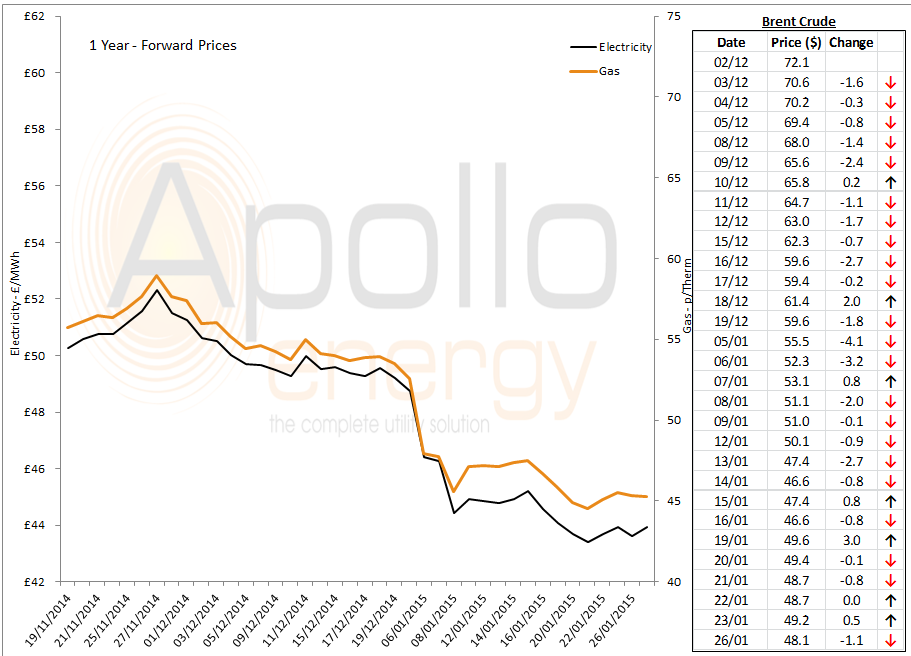 Brent 1st-nearby prices currently trade at around $48/b following a loss of over $1/b on Friday. Prices remain low with impetus coming from global over-supply, although the death of the Saudi Arabian king resulted in some upward movement last week.