The UK is temporarily experiencing weather which is around the seasonal norm today, following a period of cold temperatures which pushed demand levels higher; this drop in consumption has led to a stable-to-bearish outlook for this afternoon. Gas prices moved higher by Monday's close with support coming from an outage at the Norwegian Troll field. Colder weather is expected to return this weekend and should last until the middle of next week, while Norwegian flows are back to normal; prices are expected to hold firm. Today's prices can also be found in an easy to read table on our 'current UK energy price' page.

Gains were observed on the gas curve yesterday as supply levels were weaker than the previous week following an outage in Norway. Meanwhile demand levels in the UK were expected to climb higher again as colder weather is set to creep back in. Most power contracts mirrored their gas counterparts yesterday with Day-Ahead and near-curve contracts displaying the largest gains.   Weaker oil prices limited the upward movement on the far-curve but small increases were still evident.

Day-Ahead gas has decreased this morning, correcting downward to erase some of yesterday's gains. Overall movement on the curve was bearish with Norwegian flows back to full capacity which has resulted in a healthy supply picture. Day-Ahead power recorded a much larger loss than its gas counterpart as demand levels have eased for the time being. The rest of the curve followed gas, although slightly stronger fuel prices offered some support.

Market close data has revealed that the 1-year forward price for both commercial gas & commercial electricity moved higher- closing at 45.08ppt and £43.55/MWh, respectively. This can be seen in the graph below. 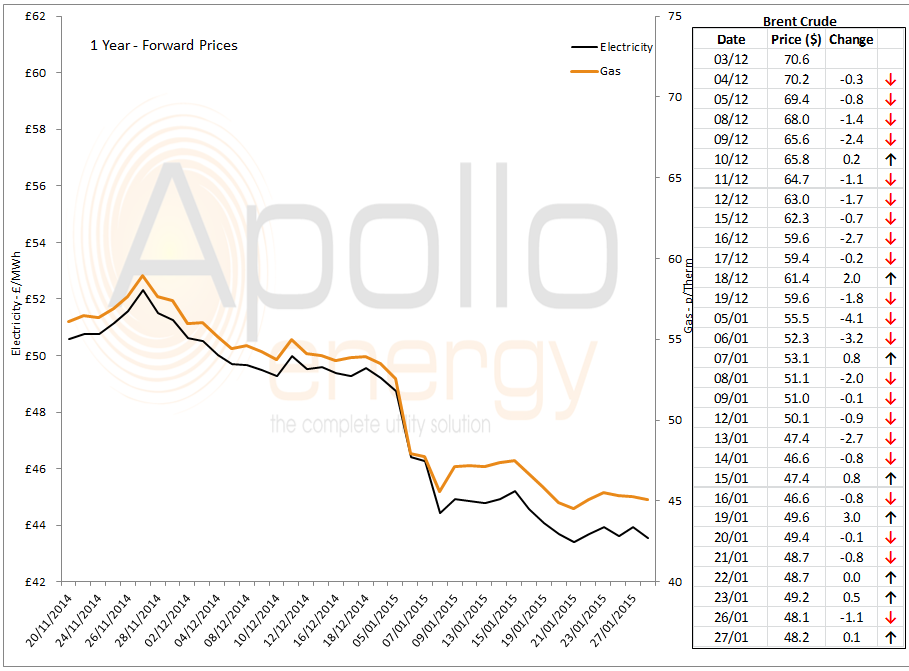 An OPEC announcement resulted in a gain yesterday afternoon but prices are back around $48/b this morning, cancelling out any upward movement displayed on Monday. OPEC claim that prices have hit their lowest point and upward movement can be expected but it is unclear when the bulls will completely take over.