Spot power prices weakened slightly during yesterday's session as solar generation was forecast to increase today and for the rest of the week. Prices should record further losses this afternoon as temperatures are set to improve in the next few days and the coal market remains bearish. Gas prices made a slight rebound yesterday due to the unplanned outage in Norway which restricted flows coming into the UK; resulting in undersupply. Today UK LDZ demand has risen by 8mcm however the Norwegian outage has been resolved which should limit any upside potential. Meanwhile, the expected rise in temperatures should help prices move down this afternoon. Today's prices can also be found in an easy to read table on our 'current UK energy price' page.

Day-Ahead gas climbed 0.55ppt higher as a consequence of the outage in Norway which led to a short UK gas system. Further along the curve contracts also displayed a bearish trend as temperatures are expected to rise. The losses ranged from 0.10ppt for Summer-16 to 0.30ppt for May-14. On the power curve Day-Ahead increased by £0.55/MWh as low wind generation was expected today. The rest of the curve also followed a bullish trend and took direction from gas with losses as high as £0.60/MWh.

Gas prices opened at a discount this morning with every contract except one recording a loss. Day-Ahead shed 0.45ppt from its price while May-14 was the biggest mover, opening 0.50ppt lower. The UK gas system was 30mcm short at the beginning of the session as Langeled flows fell below 50mcm, although strong storage withdrawals made up for this. Power prices showed no clear direction at the opening of today's session with Day-Ahead displaying a £1.05/MWh price drop on the back of a stronger wind generation forecast. On the far-curve the front two seasons moved lower while Summer-15 onwards displayed gains.

Market close data has revealed that the 1-year forward price for both commercial gas & commercial electricity decreased - closing at 59.33ppt and £47.80/MWh, respectively. This can be seen in the graph below. 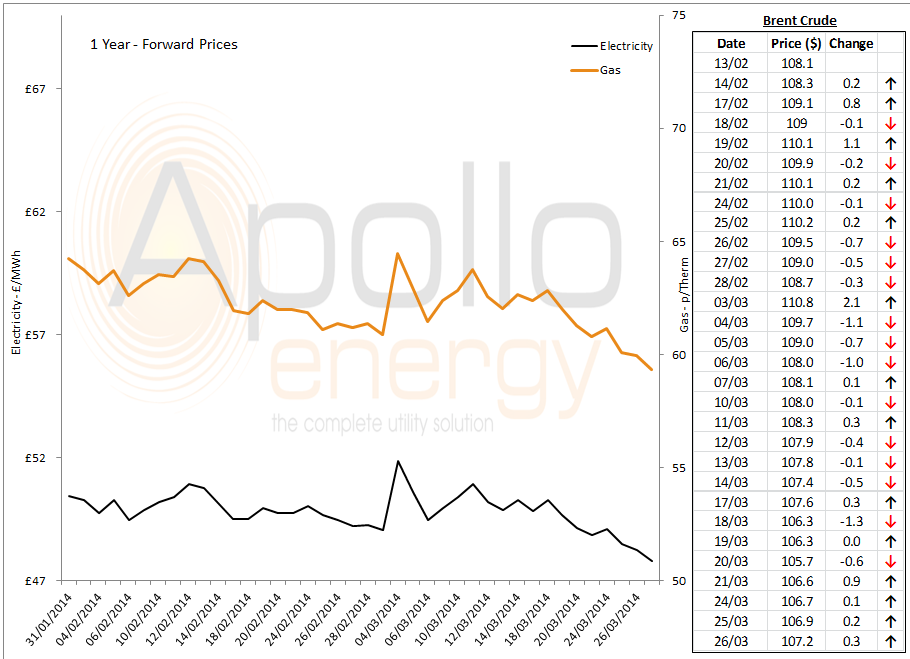 Brent 1st-nearby prices inched higher yesterday following supply concerns in Nigeria and Libya. Prices have begun today's session just above $107/b while WTI has fallen below $100/b, taking the Brent/WTI spread to -$8/b.