Spot power prices have fallen further on the back of improved solar generation and an expected rise in wind production; further losses could be made this afternoon if the coal market continues to weaken. Improved flows from Norway and a warmer weather forecast helped push gas prices lower yesterday; Langeled flows into the UK rose from 22mcm to 48mcm. Today UK LDZ demand has dropped by 4mcm and a further drop is expected over the next few days as temperatures rise. The bearish pressure should continue as Norwegian flows have improved once again and there is little change to fundamentals. Today's prices can also be found in an easy to read table on our 'current UK energy price' page.

Gas contracts moved slightly higher yesterday afternoon with the gains ranging from 0.15ppt for Summer-16 and 0.70ppt for Front-Month. The UK gas system fell short later in the day as Norwegian imports decreased. Power prices followed their gas counterparts although the gains were less prominent with Day-Ahead adding £0.30/MWh to its price due to a stronger wind generation forecast. On the far-curve prices took a downward direction as demand levels are set to drop and carbon contracts incurred losses.

The gas curve displayed a series of losses this morning and offset the gains seen yesterday afternoon. Day-Ahead fell by 0.60ppt while Front-Season shed 0.55ppt from its price as Langeled flows have ramped up and the Rough storage facility remains in withdrawal mode. Day-Ahead power fell as a consequence of improved wind generation and the usual drop in demand on Fridays. Movement on the rest of the curve varied with April-13 recording a £0.10/MWh price increase and Summer-14 opening at a £0.25/MWh discount.

Market close data has revealed that the 1-year forward price for both commercial gas & commercial electricity made small loss - closing at 59.31ppt and £47.78/MWh, respectively. This can be seen in the graph below. 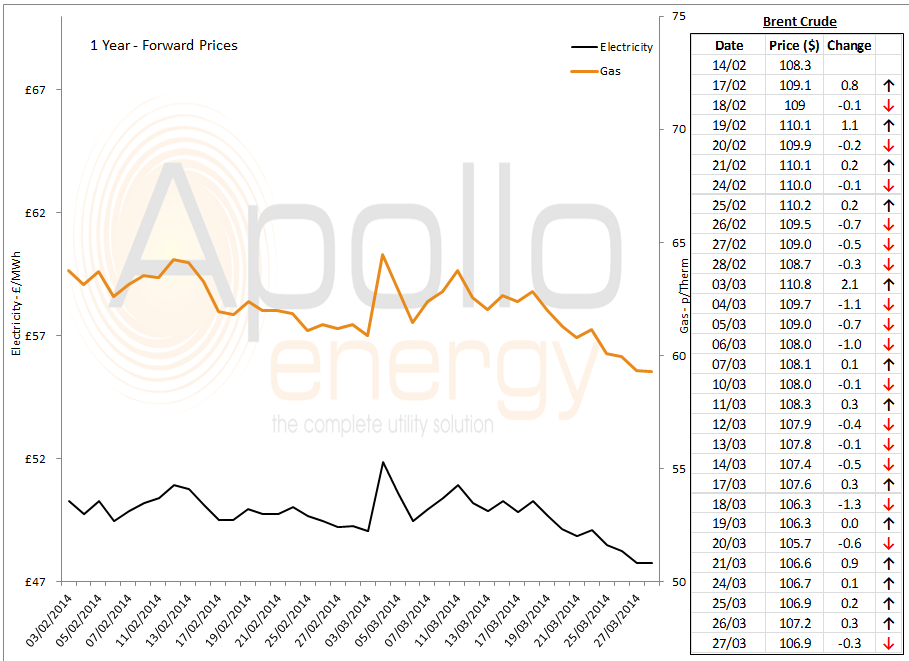 Brent 1st-nearby prices have stabilised around the $107/b mark while WTI has gained $1/b, taking the Brent/ WTI spread to -$7/b.