Spot power prices have stabilised as the ENVI committee of the EU parliament is expected to approve the Market Stability Reserve proposal which has helped to restrict any upward movement. The Market Stability Reserve (MSR) proposal is a structural reform of the temporary back-loading system and would address the build-up of excess carbon emission allowances. Gas prices recorded small gains yesterday afternoon as an unplanned outage in Norway reduced flows into the UK and demand levels remained above average. Temperatures in Europe are expected to rise over the next few days and this should result in losses across the gas-curve this afternoon. Today's prices can also be found in an easy to read table on our 'current UK energy price' page.

The gas curve displayed mixed movement yesterday as the Day-Ahead contract climbed higher and Front-Month & seasonal contracts decreased. Above average demand levels for today supported the prompt, while an improved weather outlook weighed on contracts further along the curve. Power contracts posted losses on Tuesday with seasonal contracts following their gas counterparts. A reduction in carbon prices also helped far-curve prices to move down, while the prompt was the exception to the downward movement due to today's cooler weather forecast.

An expected upturn in temperatures over the next week is set to reduce demand levels in the UK and has helped some gas contracts to shed from their price this morning. Weaker Brent has also restricted any upward movement on the far-curve. The majority of power contracts have tracked the movement of gas this morning with a warmer weather outlook helping most contracts record a loss. Wind generation is also set to improve over the coming days which has helped the Day-Ahead contract to fall.

Market close data has revealed that the 1-year forward price for both commercial gas & commercial electricity decreased - closing at 45.80ppt and £44.03/MWh, respectively. This can be seen in the graph below. 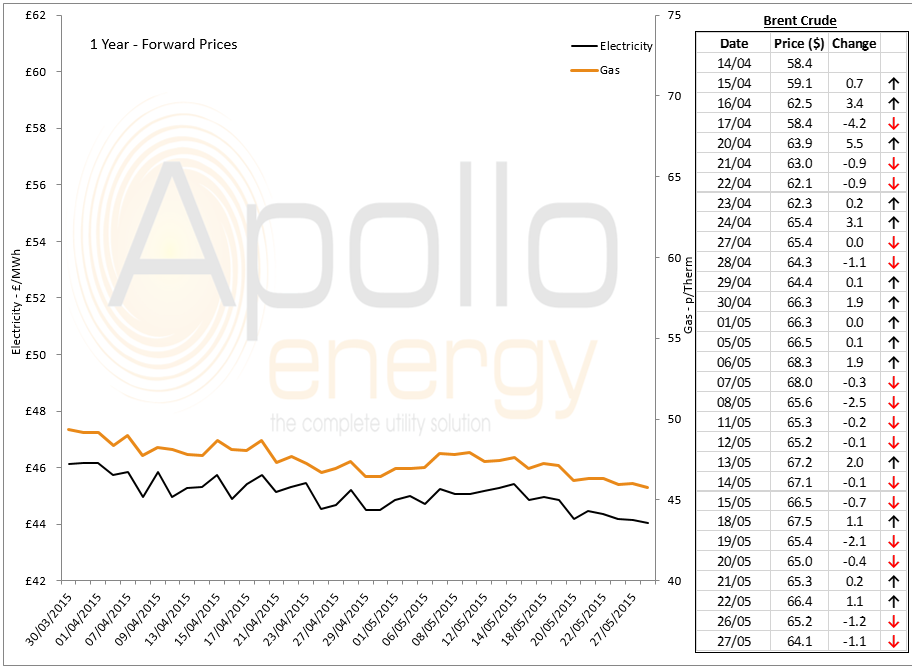 Brent 1st-nearby prices recorded another sizeable loss yesterday on the back of a stronger US Dollar, despite falling crude oil stocks; Brent currently trades at $64.12/b.