Spot prices increased yesterday as a result of a lower wind forecast for tomorrow while lignite production in Germany has also decreased. Front-month prices made gains for a third consecutive day due to low nuclear availability.

The interconnector which has been offline since the middle of June gradually started exporting again yesterday. As a result of the restart Linepack was at 12mcm long at the opening of the session but fell short again in the evening. Prices saw little movement as most contracts made a loss of 0.05ppt and Day-Ahead made no change whatsoever. The power curve also made small losses and mirrored the direction of gas somewhat with Front-Month and Front-Quarter shedding £0.30/MWh. Prompt contracts went up slightly as a number of power plants are to undergo maintenance over the weekend and demand is expected to increase by 2GW today.

Linepack opened the session long which led to Day-Ahead making a loss despite demand levels of around 208mcm, 30mcm higher than last Thursday. Front-season went up 0.30ppt and Q3-13 added 0.20ppt to its price on the back of strengthening Brent. Day-Ahead power opened up £0.35/MWh higher despite increased wind generation which was over 20GW. Stronger Brent influenced most contracts to make gains while gas-fired and coal-fired generation both held 33% of the generation mix.

Market close data has revealed that the 1-year forward price for both commercial gas & commercial electricity went up - closing at 67.76ppt and £51.40/MWh, respectively. This can be seen in the graph below. 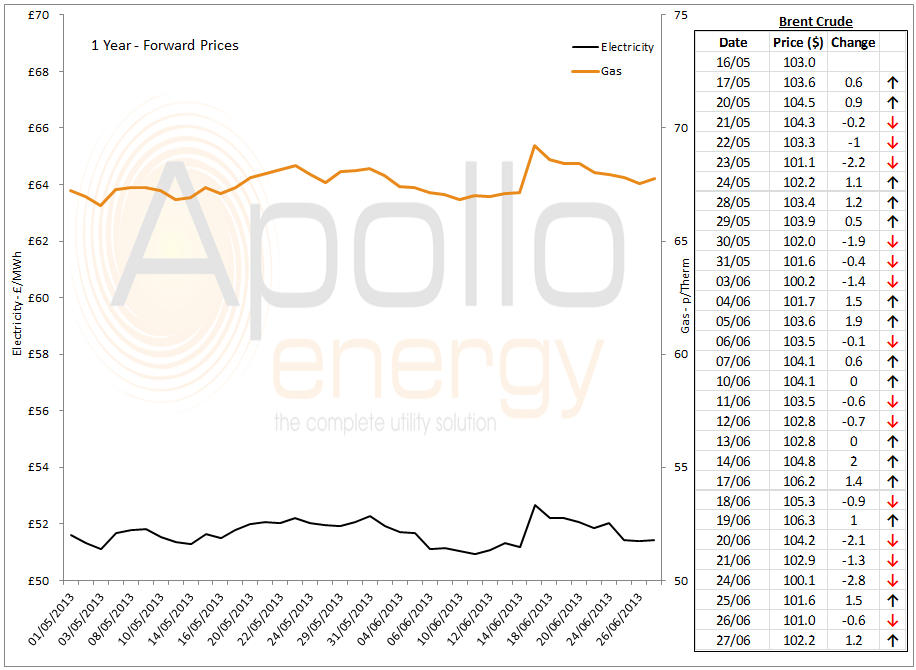 Brent 1st nearby prices fell slightly after the release of the EIA report but strengthened again following an improvement in the equity market. The EIA report had a bearish outlook with total stocks rising to 9.3Mb while crude stocks were flat due to a 0.2Mb/d increase in refinery runs and lower imports.