Spot power prices moved higher yesterday as a rise in power consumption dictated the market, while wind generation was also expected to plummet today. However, today has seen the return of a number of power units and weaker gas has resulted in significant downward movement. A short UK gas system resulted in numerous gains for gas contracts yesterday with tensions in Ukraine also a market driver. BBL flows remain at 0mcm due to maintenance but despite this, positive talks in regards to Russian supply into Europe have led to bearish movement across the curve. Today's prices can also be found in an easy to read table on our 'current UK energy price' page.

The UK gas system opened 13mcm short yesterday and became more under-supplied as the session progressed; this was largely down to the temporary closure of the BBL pipeline. Prices initially opened higher but positive talks over the Ukrainian situation helped prices to fall in the afternoon. Power prices also opened higher but recorded losses later in the day with Winter-14 falling by £1.20/MWh. Day-Ahead was the exception to the bearish movement and rose by £0.25/MWh on the back of a weak wind generation forecast.

Day-Ahead gas opened at a 0.90ppt discount today as the UK gas system opened balanced despite little change to gas flows. Eased tensions regarding Russian supply into Europe helped to weigh on prices, although Summer-15 and Winter-15 were almost unchanged. The power curve followed gas closely with Day-Ahead shedding £1.60/MWh from its price as wind generation levels are expected to pick up on Thursday. Losses were displayed across the curve with some contracts decreasing by as much as £0.70/MWh.

Market close data has revealed that the 1-year forward price for both commercial gas & commercial electricity decreased - closing at 56.30ppt and £48.95/MWh,respectively. This can be seen in the graph below. 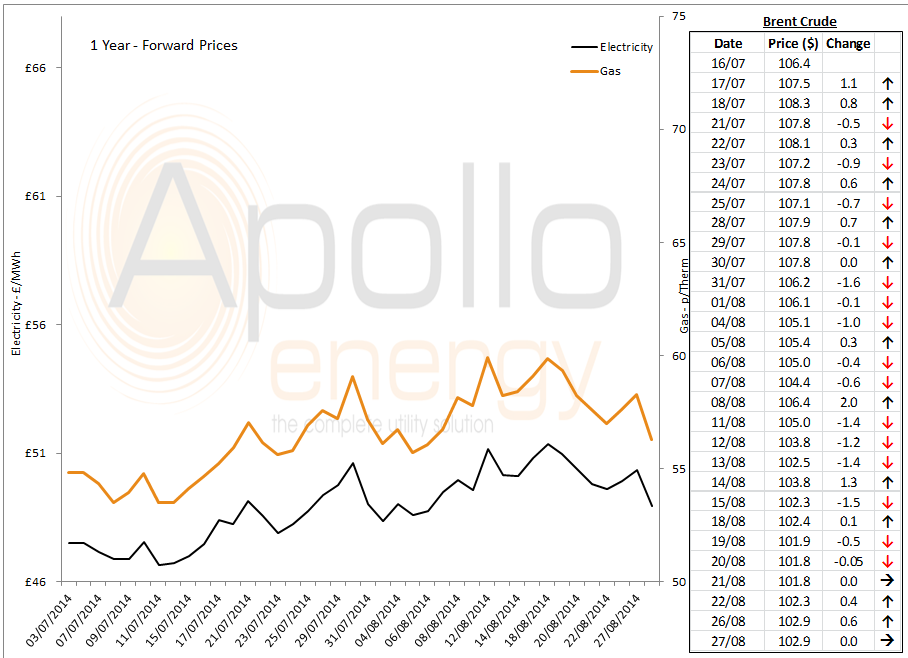 Brent 1st-nearby prices have shown very little movement since Friday but climbed to $103.33/b yesterday before ending the session at around $102.7/b; the US inventory report is the main influence on prices at present.