Warmer temperatures are expected over the weekend before returning to the seasonal norm next week, resulting in comfortable demand levels and helping spot power prices to move down. However, wind generation is set to decrease and nuclear availability is lower which has provided some support, resulting in mixed movement across the curve this morning.

Gas prices increased yesterday as Norwegian supply was reduced due to maintenance at gas fields and terminals. Maintenance in Norway continues this morning and the UK gas system remains short which has contributed towards higher prices.

Day-Ahead gas and the rest of the near-curve moved higher on Wednesday following a drop in Norwegian imports which led to an undersupplied system; flows via the Langeled pipeline fell by 16mcm to 33mcm. Meanwhile, LNG supply remained high with send-outs of 53mcm as further deliveries are expected over the next two weeks.

Near-curve power prices also ended yesterday's session at a premium with support coming from stronger gas and coal. The prompt was supported by maintenance at a 445MW CCGT plant yesterday which is expected to last until Saturday, although the gains were slightly restricted by ample renewable generation.

Movement on the gas curve is mixed this morning with a weaker demand forecast and a healthy LNG outlook helping to weigh on some contracts, while limited Norwegian supply supported the prompt and rising Brent provided bullish pressure further along the curve.
Power prices also varied in their movement with an expected drop in wind generation tomorrow helping Day-Ahead climb higher. Elsewhere, contracts were influenced by stronger gas, coal and oil and posted gains.

Market close data has revealed that the 1-year forward price for both commercial gas & commercial electricity decreased - closing at 41.63ppt and £42.13/MWh, respectively. This can be seen in the graph below. 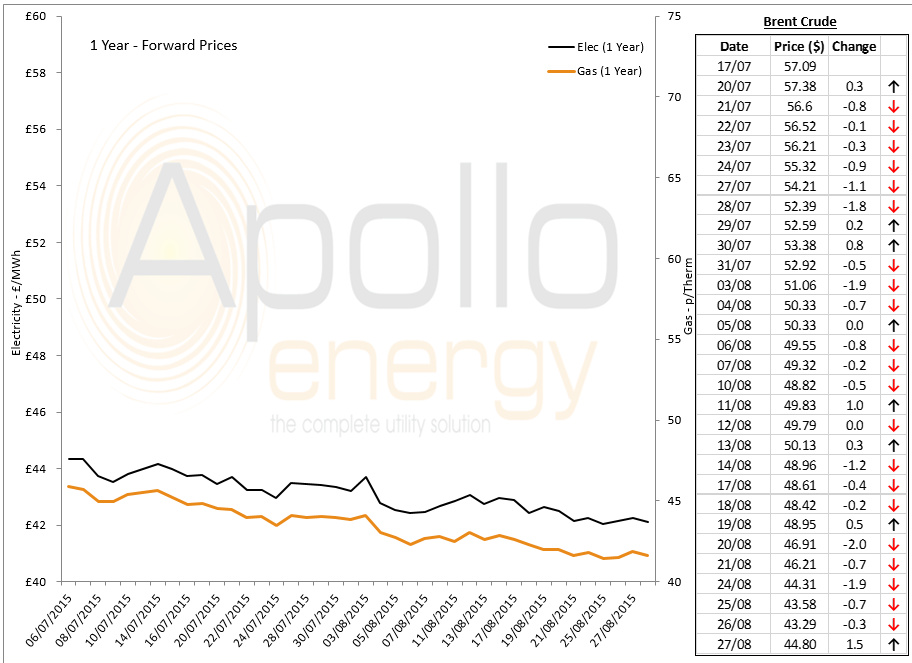