European spot prices saw mixed movement yesterday as weaker nuclear supply was offset by slightly milder temperatures and high wind generation. NBP spot prices moved down yesterday despite a tight UK gas system as demand levels are expected to drop on Wednesday. Today UK LDZ demand has fallen by 22mcm and is around the seasonal average, while gas flows in general have weakened slightly; resulting in a short system which could support prices. Today's prices can also be found in an easy to read table on our 'current UK energy price' page.

Day-Ahead gas was the only prompt contract to move higher in yesterday's session, increasing by 0.15ppt despite a drop in demand today. Front-Month and Front-Quarter fell by 0.20ppt and some seasonal contracts displayed no change. The power curve saw similar movement to gas with Day-Ahead rising by £0.55/MWh, while the rest of the curve was rather flat. Gas-fired generation still holds a large share of the generation mix despite the return of a few nuclear and coal-fired facilities. Changes to seasonal contracts were varied with Summer-14 displaying no movement and Summer-15 climbing £0.20/MWh higher.

Day-Ahead gas started the day showing no movement but moved higher later in the morning. Demand levels have fallen by around 25mcm but linepack started the session 5mcm short, later falling to 20mcm short on the back reduced storage withdrawals. Slightly milder weather is expected for the rest of the week which has restricted any gains made by the Day-Ahead contract which opened £0.10/MWh higher. While gains of up to £0.30/MWh were made by monthly and quarterly contracts. In terms of the generation mix, Gas-fired generation still hold a significant share although wind production has improved this morning but could decrease later in the day.

Market close data has revealed that the 1-year forward price for both commercial gas & commercial electricity went up - closing at 67.65ppt and £52.68/MWh, respectively. This can be seen in the graph below. 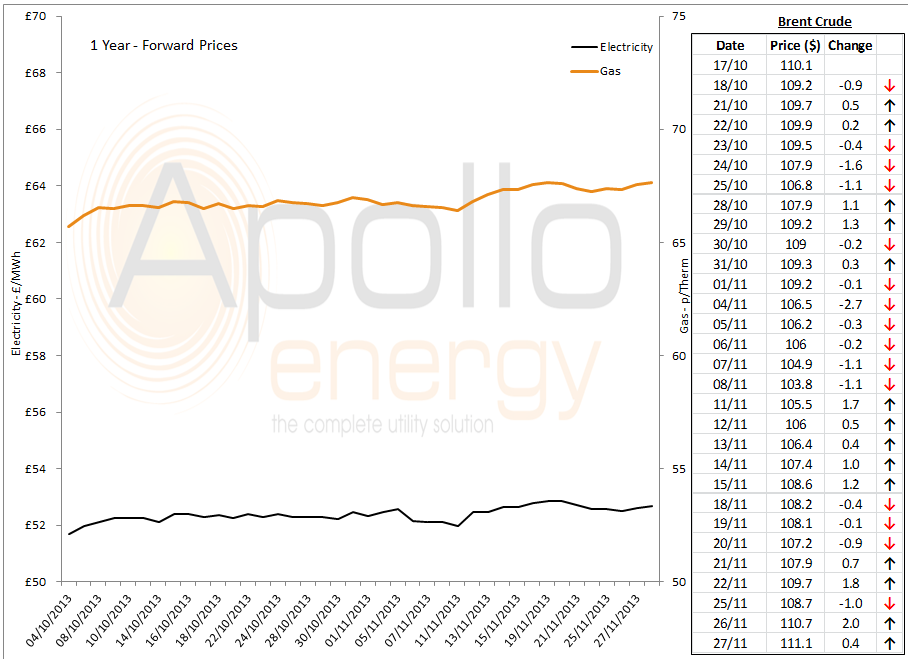 Brent 1st-nearby prices remain around $111/b while WTI lost $0.80/b taking the Brent/ WTI spread to -$17.5/b. Meanwhile crude prices are back around last week's levels following the Iranian nuclear agreement.