Spot power prices were bullish yesterday on the back of high demand levels and low wind production. However, a revised weather forecast is predicting milder temperatures over the next few days, helping to weigh on prices while demand levels are also lower today. Gas prices opened with significant gains yesterday but fell throughout the day as fundamentals improved slightly. Temperatures are expected to turn milder until the end of the week and Norwegian output has improved somewhat, leading to downward movement this morning. Today's prices can also be found in an easy to read table on our 'current UK energy price' page.

The UK gas system grew in length as Wednesday's session progressed, helping prices to decrease in the afternoon. Further along the curve most contracts kept their early morning gains although weaker Brent helped to restrict any further upward movement. Power prices strengthened yesterday as strong demand dictated the market and low wind production offered support to the near-curve. Further out some bearish support was offered by weakening gas and oil.

Day-Ahead gas fell by 0.90ppt this morning, while Front-Month opened at a 0.60ppt discount in a bearish opening to today's session. The UK gas system opened 20mcm long this morning and was the main factor for the downward movement. Langeled and BBL flows both increased while storage withdrawals at the Rough facility were also slightly higher. On the power curve Day-Ahead recorded a large loss of over £6/MWh with the usual drop in demand on Fridays a market driver. Additional influence also came from weaker gas and an improved weather outlook, leading to numerous price-drops on the near-curve. Losses were also evident on the far-curve with January-15 falling by £0.45/MWh.

Market close data has revealed that the 1-year forward price for both commercial gas & commercial electricity decreased - closing at 57.65ppt and £51.50/MWh, respectively. This can be seen in the graph below. 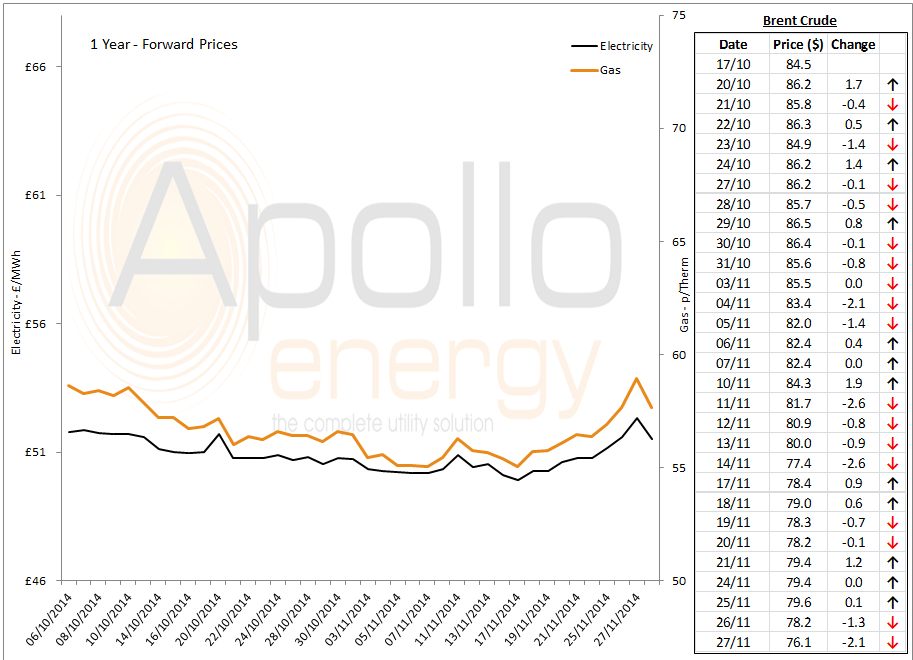 Brent 1st-nearby prices have recorded another loss this morning of over $2/b to trade just above $76/b with influence coming from on-going talks regarding potential OPEC oil cuts.