Spot power prices are on the rise with impetus coming from increased demand as temperatures have fallen back below the seasonal norm. This colder weather is expected to last until the middle of next week at least and most contracts are expected to maintain a bullish trend until then. The colder weather forecast also dictated gas prices on Tuesday with further support coming from scheduled maintenance at numerous gas facilities in Norway. Norwegian gas flows are down by 10mcm today and below average weather has resulted in a tighter UK gas system; further upward movement is anticipated this afternoon. Today's prices can also be found in an easy to read table on our 'current UK energy price' page.

The majority of the gas curve displayed an increase yesterday as the UK has been hit by another cold-snap, increasing demand for heating. A drop in Norwegian flows due to outages reduced imports into the UK by 18mcm although the UK gas system remained comfortable. Power prices also closed at a premium as the curve was dragged higher by strengthening gas, coal and oil. Wind generation levels are expected to remain strong for the coming days but this failed to offset the effect of growing demand.

Further gains were displayed on the gas-curve this morning with the largest gains recorded on the near-curve as Day-Ahead climbed 1.65ppt higher; cold weather and rallying fuel prices dictated the market. Day-Ahead power moved £2.25/MWh higher this morning despite healthy wind generation as heating demand was much greater than yesterday. The gains filtered through to the far-curve with the exception of Summer-17 which opened at a £1.20/MWh discount.

Market close data has revealed that the 1-year forward price for both commercial gas & commercial electricity moved higher- closing at 45.93ppt and £44.05/MWh, respectively. This can be seen in the graph below. 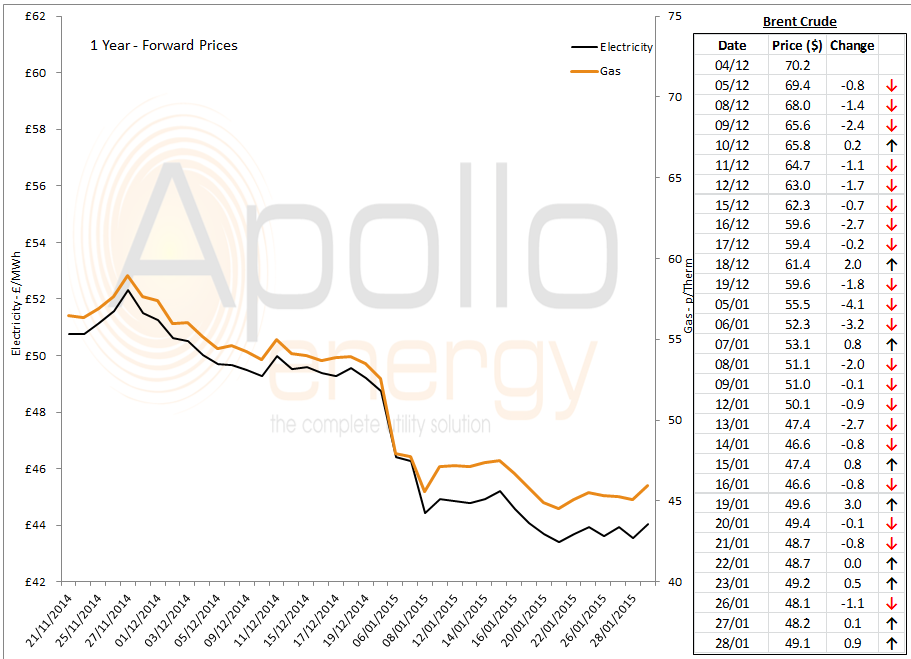 Brent 1st-nearby prices edged closer to $50/b yesterday as the market slowly attempts to correct itself. However, a slight drop in prices could occur this afternoon when the latest EIA report is released, as US stocks are expected to rise.