Spot power prices are likely to move down later today and could register further losses over the weekend should carbon contracts decrease again. European temperatures are expected to be around average and the drop in nuclear availability should be offset by healthy wind production. Gas prices were supported by colder weather on the continent yesterday and weaker imports into the UK. Today UK LDZ demand is expected to increase by 7mcm which could see gas contracts strengthen, although weaker Brent should see prices hold firm. Today's prices can also be found in an easy to read table on our 'current UK energy price' page.

Gas contracts saw little change yesterday with Day-ahead showing no movement whatsoever. The largest drop on the near-curve was 0.05ppt while further along the curve Summer-15 was the biggest mover and recorded a 0.35ppt gain. The power curve followed a similar trend to gas although Day-Ahead fell by £0.85/MWh despite a decline in nuclear availability. Most prompt contracts were unchanged while far-curve contracts displayed gains.

Gas prices moved higher this morning as Day-Ahead increased by 0.70ppt and Front-Month rallied 0.60ppt higher. The UK gas system opened short as demand levels increased by around 10mcm and BBL flows dropped by almost a third. Temperatures should be slightly cooler over the weekend but this should be temporary with warmer weather and higher winds expected next week. In terms of power, contracts garnered support from gas and carbon prices with some prompt contracts rising by as much as £0.95/MWh due to a low wind generation forecast for tomorrow.

Market close data has revealed that the 1-year forward price for both commercial gas & commercial electricity moved higher - closing at 61.38ppt and £49.25/MWh, respectively. This can be seen in the graph below. 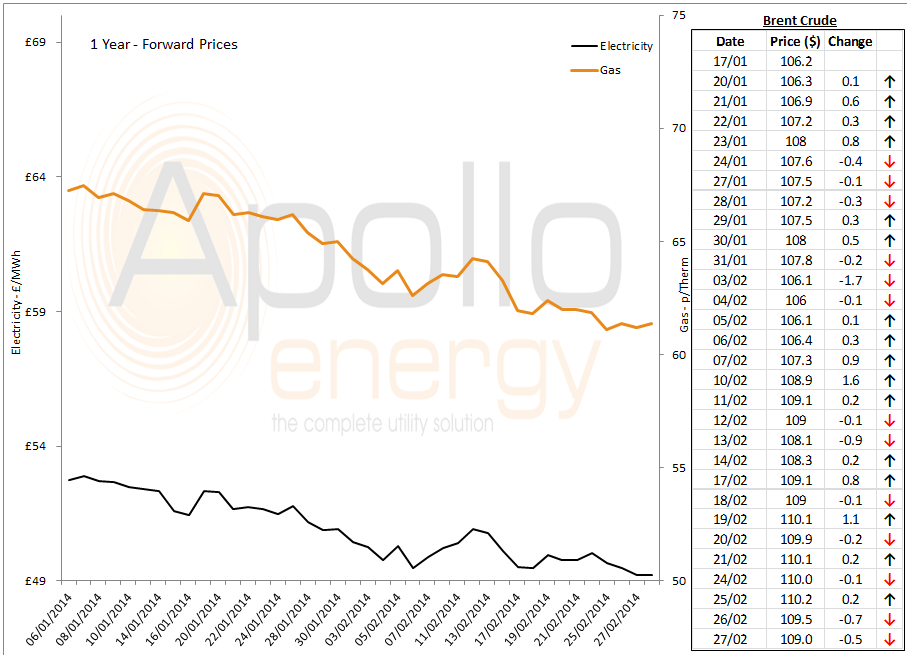 Brent 1st-nearby prices hovered around the $109.5/b mark during yesterday's trading session but ended the session unchanged. This morning prices have dropped to around $109/b due to a stronger US Dollar, while WTI recorded a $0.76/b gain to take the Brent/ WTI spread to -$7/b.