Spot power prices are expected to move down as temperatures have improved and are expected to remain mild over the weekend. Wind generation is forecast to decrease over the next few days but a potential drop in coal and warmer weather should weigh on prices further. Gas prices also moved down as demand levels continue to decline, while storage withdrawals in the UK were strong. UK LDZ demand has fallen by 18mcm today and temperatures are forecast to be mild over the weekend which should lead to a bearish trend this afternoon. Today's prices can also be found in an easy to read table on our 'current UK energy price' page.

Gas contracts took a downward direction yesterday as Day-Ahead fell by 0.25ppt and June-14 registered the largest loss of 1.20ppt. The UK gas system opened the session 10mcm short but gradually moved long over the course of the day as Langeled flows improved. Seasonal contracts decreased by as much as 0.45ppt and ignored rising Brent. Day-Ahead power was the only contract to move higher yesterday and registered a gain of £0.25/MWh despite the warmer weather forecast this weekend. The rest of the curve followed their gas counterparts with some contracts displaying losses of up to £0.90/MWh.

The gas curve opened lower this morning as a result of the milder weather forecast which is expected to lead to a drop in demand. Linepack opened 14mcm short as overall gas flows decreased by 32mcm with Langeled flows suffering another drop; storage levels remain around 52%. Prompt power prices opened at a discount and followed a similar direction to gas, taking influence from falling demand levels. Further along the curve some contracts registered a small gain despite a weaker carbon market as coal prices strengthened this morning.

Market close data has revealed that the 1-year forward price for both commercial gas & commercial electricity made small loss - closing at 58.43ppt and £47.06/MWh, respectively. This can be seen in the graph below. 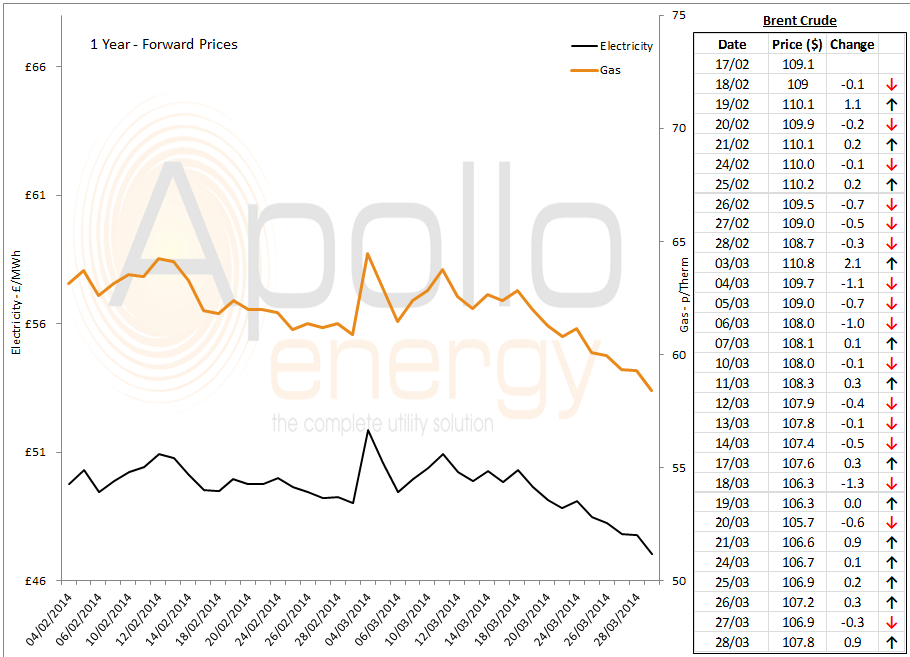 Brent 1st-nearby prices climbed $0.80/b higher yesterday while WTI added $1/b to its price which took the Brent/ WTI spread to -$6/b; positive economic data from the US was the main market driver.