Spot power prices rallied higher yesterday with stronger gas a bullish factor, combined with a colder weather forecast. Further upward movement has been recorded this morning although a strong wind production forecast has helped to weigh on the prompt contract. Gas prices were dictated by an uptick in demand yesterday morning which led to a short UK gas system. Further gains were recorded in the afternoon as a consequence of Centrica's announcement regarding reduced storage levels and this news has continued to push prices higher this morning. Today's prices can also be found in an easy to read table on our 'current UK energy price' page.

Gas prices moved higher yesterday as demand levels increased, resulting in a short UK gas system; overall gas flows were also reduced as the Bacton facility suffered an outage. Meanwhile, Centrica announced that its storage capacity will be reduced by around 30% for the next six months while site testing takes place in the North Sea. The power curve also displayed strong gains with some contracts recording monthly highs with below average temperatures expected in the UK next week. Seasonal contracts followed the movement of gas and also recorded large increases.

The UK gas system has opened 10mcm short this morning which has helped to push near-curve prices higher, while seasonal contracts continue to take direction from reduced storage levels. Centrica's confirmation of reduced capacity for the six months remains the main market driver with a stronger outlook for Brent also offering support. The majority of power prices have followed the movement of their gas counterparts this morning. However, Day-Ahead was the exception to this upward movement and recorded a loss of $3.50/b as wind generation is expected to rise over the weekend.

Market close data has revealed that the 1-year forward price for both commercial gas & commercial electricity increased - closing at 49.35ppt and £46.13/MWh, respectively. This can be seen in the graph below. 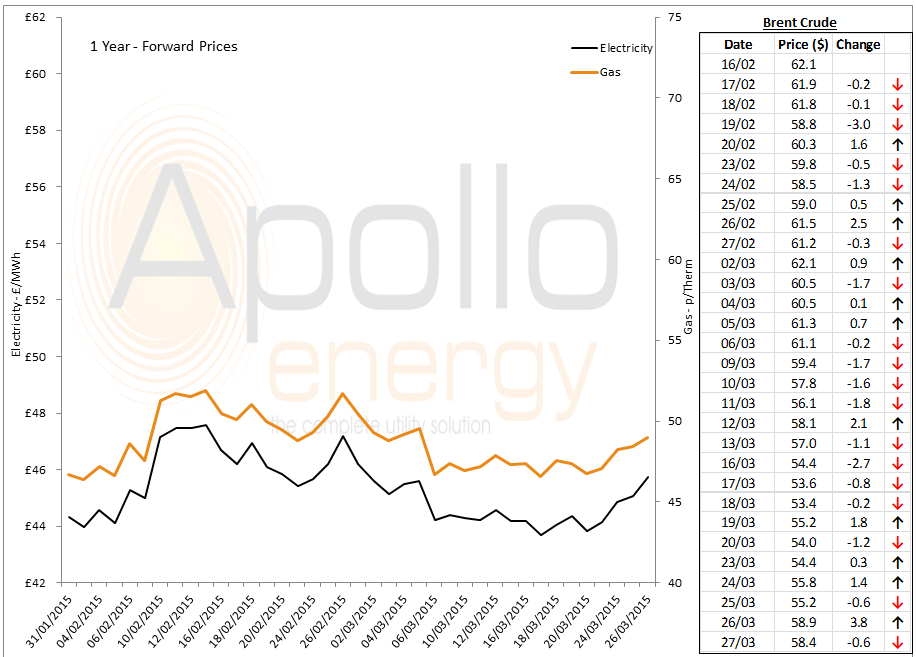 Brent 1st-nearby prices recorded strong gains yesterday due to the current conflict in Yemen but have posted a small loss this morning and currently trade around $58.4/b.