Spot power prices are expected to move down today as wind generation levels are set to hit record figures, while temperatures are forecast to be above average until Wednesday. However, the drop in temperature will fall in line with the Easter holidays meaning consumption levels should be comfortable. Gas prices moved down on Friday following a 'sell-off' late in the session which erased the morning's upward movement. A reduction in capacity at the Rough storage facility continues to support prices this morning although fundamentals are generally healthy and some downward movement is likely. Today's prices can also be found in an easy to read table on our 'current UK energy price' page.

Centrica confirmed that its capacity will be reduced by 2.7-3bcm (representing a 30% reduction) for the next 6 months, offering strong support to winter contracts in the morning. However, near-curve prices moved down in the afternoon as demand levels were expected to weaken over the weekend. Power prices followed their gas counterparts and were also dictated by the drop in capacity at the Rough facility. Winter contracts added to their price in the morning but later recorded losses as traders attempted to correct themselves.

Movement on the gas market was mixed this morning with weaker oil and an expected drop in demand tomorrow weighing on some contracts. Whereas the effects of Centrica's announcement last week are still a factor and helped to support some seasonal contracts. Day-Ahead power recorded a large gain this morning due to the usual rise in industrial demand on Mondays, although a strong wind generation forecast has helped some near-curve prices to soften. Temperatures are expected to remain mild for the time being but the monthly forecast predicts below average weather for the majority of April.

Market close data has revealed that the 1-year forward price for commercial gas moved down while commercial electricity increased - closing at 49.18ppt and £46.18/MWh, respectively. This can be seen in the graph below. 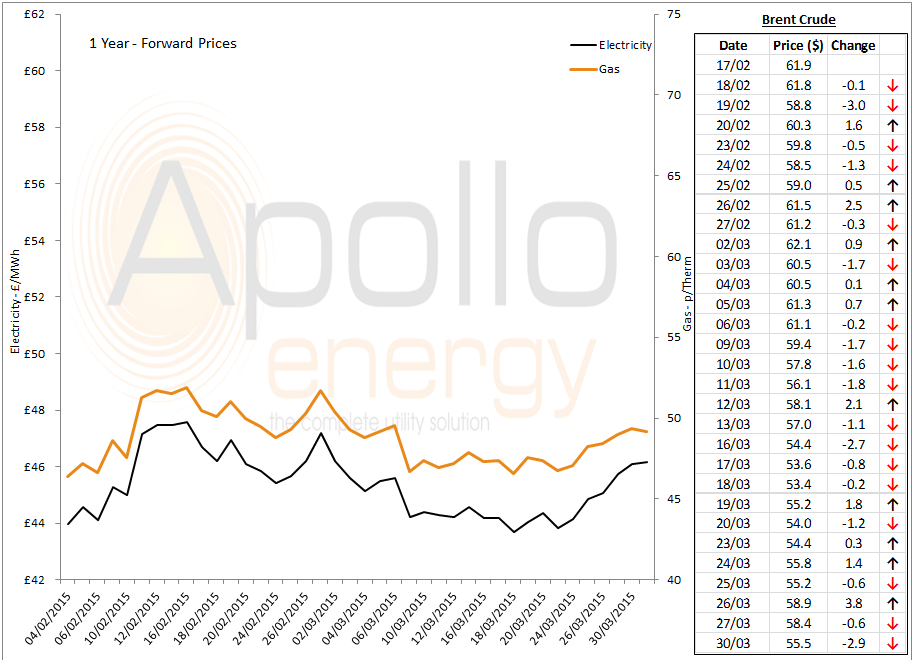 Brent 1st-nearby prices recorded a significant loss over the weekend as talks are on-going in regards to lifting oil sanctions in Iran, which would increase market availability; Brent currently trades at $55.49/b.