Spot power prices were on the rise yesterday as colder weather hit the UK, increasing heating demand, while wind and solar generation was also weaker. Today, falling gas and oil prices are the main market drivers and this afternoon's outlook is stable-to-bearish. Gas prices initially opened higher yesterday but decreased as the session progressed despite below average temperatures, as healthy LNG supply and improving Norwegian flows helped prices weaken. Temperatures are expected to improve gradually from tomorrow, onwards although today's gas system remains under-supplied due to strong demand. Elsewhere, increasing Norwegian exports due to the completion of maintenance should result in further bearish movement today. Today's prices can also be found in an easy to read table on our 'current UK energy price' page.

The gas curve displayed losses yesterday despite a strong start to the session as the completion of maintenance at numerous Norwegian gas facilities increased exports into the UK, offsetting high demand levels. Power prices displayed a similar trend to gas in the afternoon and corrected downwards following gains in the morning, on the back of colder weather. Renewable generation levels were also lower but wind production was expected to rise today, helping to weigh on the prompt contract.

Norwegian gas flows are expected to return to normal levels tomorrow as the Troll processing facility is set to return to full capacity, after its initial restart date was pushed back due to unplanned outages. This increase in supply has helped the majority of contracts to move down this morning. The gas market was once again the main driver of power prices this morning and downward movement was observed across the curve. Meanwhile, an expected uptick in temperatures later in the week and an improved renewable generation outlook were two additional factors.

Market close data has revealed that the 1-year forward price for both commercial gas & commercial electricity decreased - closing at 47.35ppt and £44.50/MWh, respectively. This can be seen in the graph below. 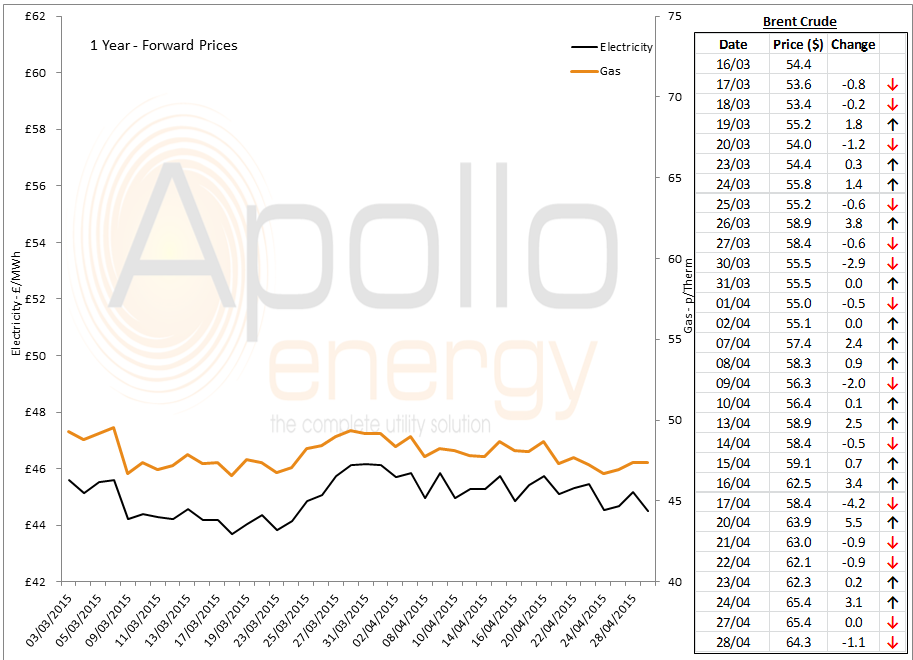 Brent 1st-nearby prices were close to a 4  ½ month high yesterday but have recorded a loss this morning and currently trade below $64.3/b. An expected rise in US stocks and an announcement that Saudi Arabia could export more oil to China, if required are the main market drivers.