Spot power prices decreased yesterday as supply levels remained healthy with renewable generation also forecast to increase later in the week and with very few outages affecting production in Europe. Gas prices displayed a small rebound yesterday despite an over-supplied system, with direction coming from above average demand levels due to the cooler weather. Gas demand is set to remain high as temperatures could fall 5 °C below the seasonal norm; pushing prices higher today. Today's prices can also be found in an easy to read table on our 'current UK energy price' page.

Contracts lifted across the gas curve yesterday as rising demand provided support, with domestic consumption levels of 186mcm, 35mcm above the seasonal average. Strong exports of 33mcm to Belgium also contributed to the gains on the near-curve, while restrictions at the Rough storage facility supported the front-winter contract. Power contracts displayed a rebound yesterday afternoon and followed the movement of gas. Front-month fell to its lowest price for three weeks on Friday but recovered to close at £41.25/MWh, a gain of £0.35/MWh. Elsewhere, weaker wind generation and below average temperatures for today helped the prompt move higher, which in turn supported August-15.

High demand levels are set to continue for the rest of the week as temperatures will remain below average, helping near-curve gas contracts to move higher once again. Meanwhile, production at the Rough storage facility will capped at 3bcm until summer 2016, helping contracts further along the curve to open at a premium. Renewable generation is set to improve tomorrow which has helped to restrict some of the morning's gains on the near-curve but strong demand remains the main market driver. Temperatures across the UK are forecast to be 5 °C below average for the remainder of this week, with overnight temperatures expected to drop below 10 °C.

Market close data has revealed that the 1-year forward price for commercial gas displayed a small gain, while commercial electricity decreased slightly - closing at 44.05ppt and £43.43/MWh, respectively. This can be seen in the graph below. 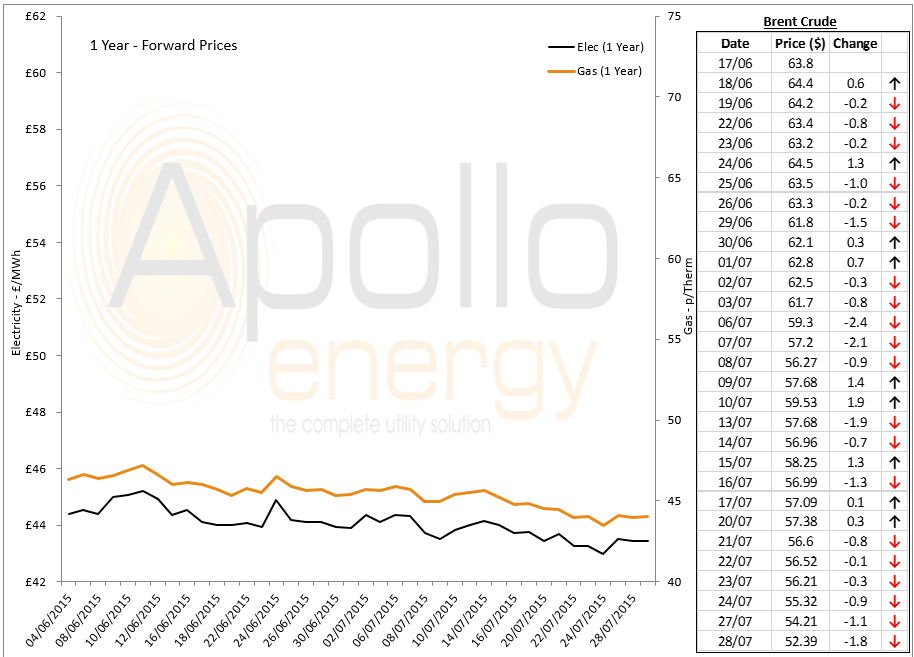 Brent 1st-nearby prices continued to plummet and currently trade just below $52.4/b, global oversupply remains the main market driver and the support offered by a weaker US Dollar was ignored.