Spot prices moved down slightly yesterday but remained over £51/MWh as 4 nuclear reactors have had their return dates pushed back and a number of coal-fired plants also suffered outages. Gas prices took an upward direction yesterday as the injections into the Rough storage facility increased which led to higher demand. October 2013 prices are expected to hold firm today as there are no obvious tensions that could affect the market. Today's prices can also be found in an easy to read table on our 'current UK energy price' page.

Gas prices went up yesterday as the system was unbalanced for the majority of the session as higher demand required the Langeled pipeline to increase flows from 38mcm to 55mcm. Day-Ahead rose by 0.10ppt and Front-Month climbed 0.25ppt higher on the back of this increased gas demand. Day-Ahead power closed the session £0.50/MWh higher as the system buy price reached £102/MWh despite the return of two nuclear reactors this afternoon. Wind production is expected to fall slightly and remain below 1GW which helped prices move higher.

Gas flows strengthened this morning as flows via the Langeled pipeline opened at 40mcm but later dropped to 24mcm. It is thought that Norwegian flows could increase next month as average Langeled flows in October 2012 were at 57mcm. Day-Ahead registered the most significant drop of 0.50ppt while the sentiment on the rest of the curve was mixed. On the power curve Day-Ahead fell by around £2.00/MWh and ignored the usual rise in demand on Mondays. UK wind generation declined by 9GW day-on-day and now holds 2% of the generation mix as European production is also low. The rest of the curve made minor gains which ranged from £0.05/MWh to £0.15/MWh.

Market close data has revealed that the 1-year forward price for both commercial gas & commercial electricity made gains - closing at 66.50ppt and £51.60/MWh, respectively. This can be seen in the graph below. 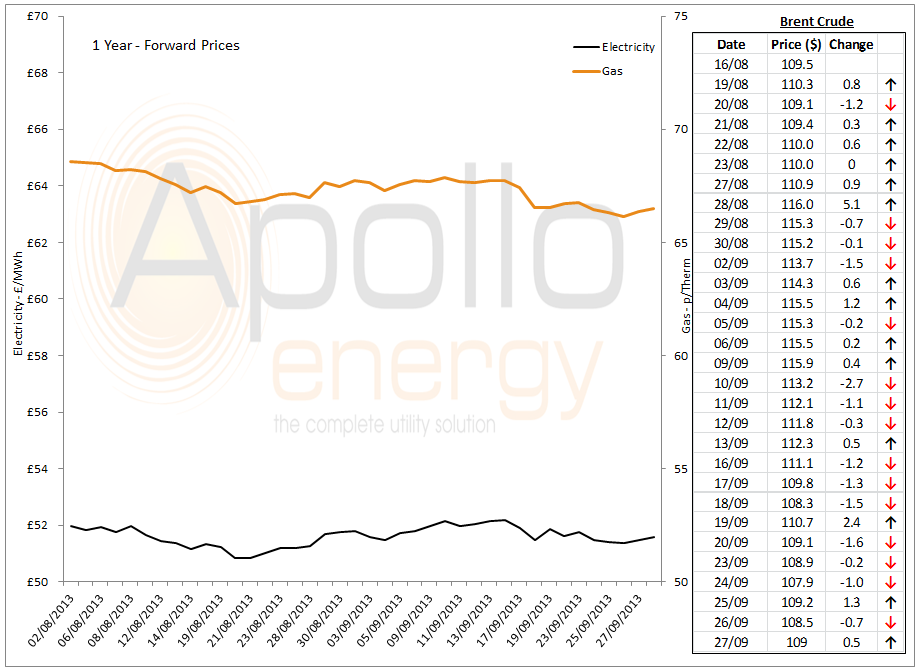 Crude prices turned bullish yesterday as Brent rose by $0.89/b and WTI added $0.37/b to its price. On-going UN talks regarding the Iranian nuclear program was the main driver of prices as Iranian crude exports are still subject to sanctions.