Spot power prices are expected to rise as the week progresses, with lower renewable generation pushing contracts higher. However, continued mild temperatures and improved nuclear availability should result in losses today. Gas prices were generally stable yesterday as weak demand was offset by a UK gas system which fell short in the afternoon, following an outage. A slight drop in temperature is forecast for tomorrow which should push demand levels higher, while gas flows are at a similar level to yesterday; bullish movement is expected. Today's prices can also be found in an easy to read table on our 'current UK energy price' page.

Gas prices held firm yesterday with lower consumption failing to weigh on contracts too heavily due to an unplanned outage. Further along the curve a forecast of a mild winter resulted in a lack of trading. Day-Ahead power fell by £0.25/MWh yesterday to end the session at £43/MWh, with weaker demand the main driver. Movement in general was minimal on the power curve on Monday, with little change to fundamentals over the weekend.

The UK gas system was 6mcm short this morning despite a 5mcm increase in overall gas flows due to improved Langeled output. Day-Ahead climbed 1.10ppt higher and other near-curve contracts also displayed gains. Any bearish movement was restricted by an unplanned outage at a gas pipeline and far-curve contracts also moved higher. Power prices opened at a premium this morning and followed their gas counterparts, with Day-Ahead soaring £7.75/MWh higher as wind generation is set to fall considerably tomorrow. The rest of the near-curve displayed less prominent gains with weaker carbon contracts a factor. Further along the curve most contracts were generally stable with a mild weather forecast preventing the bulls from taking control.

Market close data has revealed that the 1-year forward price for both commercial gas & commercial electricity climbed decreased - closing at 56.18ppt and £50.55/MWh, respectively. This can be seen in the graph below. 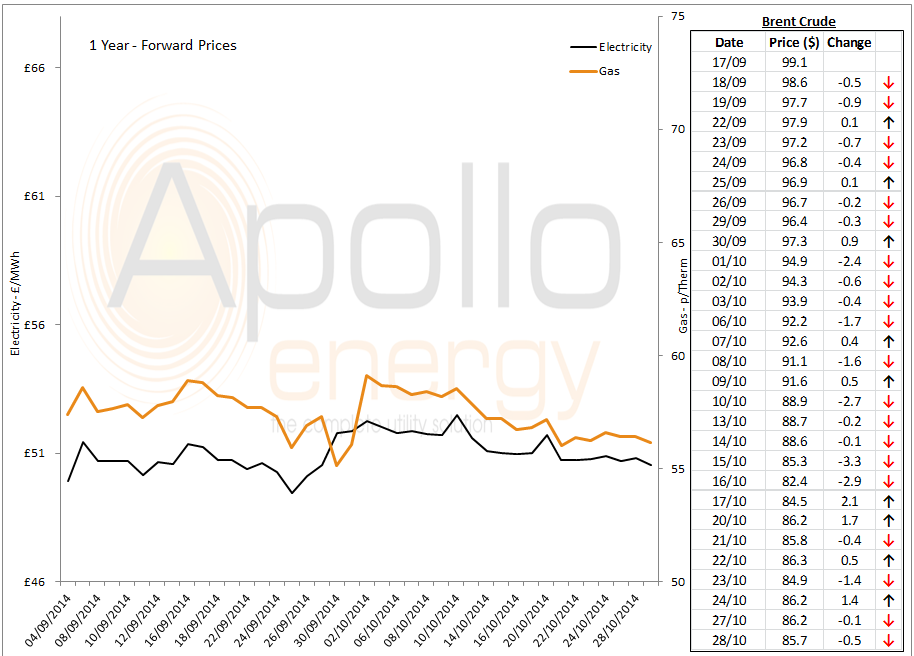 Brent 1st-nearby prices displayed mixed movement yesterday but ended the session with a $0.30/b loss; currently trading at $85.7/b. Meanwhile, WTI followed a similar trend throughout the session and remains just above $80.5/b.