European Spot prices saw varied movement yesterday as higher wind generation helped German prices fall, while the rest of Europe took direction from the cold temperatures leading to increased demand. Gas prices moved higher yesterday following a drop in Central European and Norwegian flows which led to a tighter UK gas system. UK LDZ demand has dropped by 2mcm today and is currently 5.5% below the seasonal average. Norwegian flows have fallen by 35mcm due to an outage at the Ormen Lange gas field and prices could make further gains as a result. Today's prices can also be found in an easy to read table on our 'current UK energy price' page.

Day-Ahead gas added 0.35ppt by the end of yesterday's session as the system remained short for most of the day. The system was on the short side despite an increase in flows with send-outs via the Rough facility reaching 22mcm and South Hook flowing at a rate of 30mcm. Seasonal contracts were influenced by weaker Brent and moved down slightly. Power contracts also moved higher with Day-Ahead closing at a £0.65/MWh premium due to a lower wind generation forecast for today although demand levels are not expected to change. A number of nuclear units went offline meaning more expensive gas-fired generation was required to make up the shortfall.

The gas curve opened the session with upward movement as Day-Ahead rose by 0.75ppt on the back of a 45mcm drop in Langeled flows. The system was almost 30mcm short as a result and extra storage withdrawals from Rough and Theddlethorpe were required to cover the deficit. Stronger Brent supported far-curve contracts and seasonal contracts climbed by as much as 0.45ppt. Wind generation is set to see a significant improvement tomorrow and this helped drive Day-Ahead down with the contract decreasing by £6.20/MWh. Brent's bullish movement led to price gains on the rest of the curve with additional support from stronger EUA contacts.

Market close data has revealed that the 1-year forward price for both commercial gas & commercial electricity went up - closing at 67.73ppt and £52.73/MWh, respectively. This can be seen in the graph below. 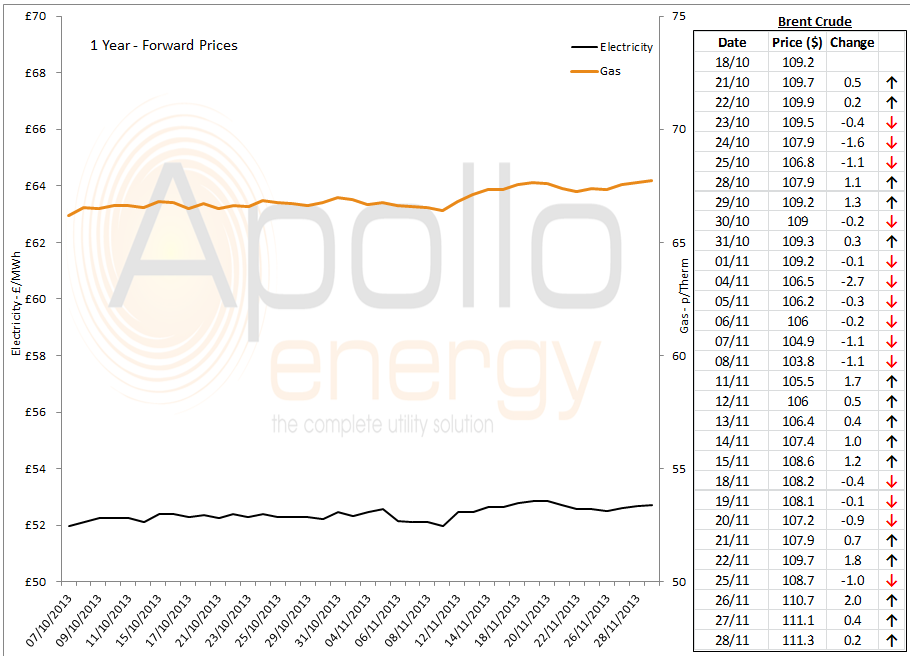