Spot prices fell on the back of improved wind generation; the supply picture is also healthy despite colder weather on the continent. The rest of the week should see below average temperatures in the UK and further bearish pressure is expected. Gas prices held firm yesterday as the system was relatively balanced and there was little change to demand levels. UK LDZ demand has climbed 16mcm higher which could lead to an increase in storage withdrawals. BBL flows have decreased and the UK interconnector is still in export mode, however mild weather is expected and as a result prices are expected to stabilise today. Today's prices can also be found in an easy to read table on our 'current UK energy price' page.

Gas prices moved higher by the end of yesterday's close as they took influence from the recent economic growth in the UK, which also led to a stronger British Pound. Brent prices also increased, adding further bullish pressure although two LNG deliveries are expected at the start of February which limited the gains somewhat. The power curve also displayed upward movement with Day-Ahead rising by £0.90/MWh ignoring a stronger wind generation forecast for today. However a coal-fired power plant is expected to come back online later today which restricted the gains. The rest of the curve also moved higher and took direction from stronger gas.

Near-curve gas prices saw little movement at the start of today's session with Day-Ahead adding just 0.05ppt to its price. There were more significant changes further along the curve with some contracts falling by up to 0.35ppt. Gas flows were largely unchanged and the UK system opened 7mcm long. The Rough facility was withdrawing at a rate of 44mcm and storage levels now stand at around 77%. Day-Ahead power rose by over £3.00/MWh as a sizeable drop in wind generation is expected for tomorrow but levels could improve again on Friday. The was no clear trend further along the curve as Front-Month fell by £0.25/MWh and Front-Quarter climbed £0.05/MWh higher

Market close data has revealed that the 1-year forward price for both commercial gas & commercial electricity decreased - closing at 65.00ppt and £50.93/MWh, respectively. This can be seen in the graph below. 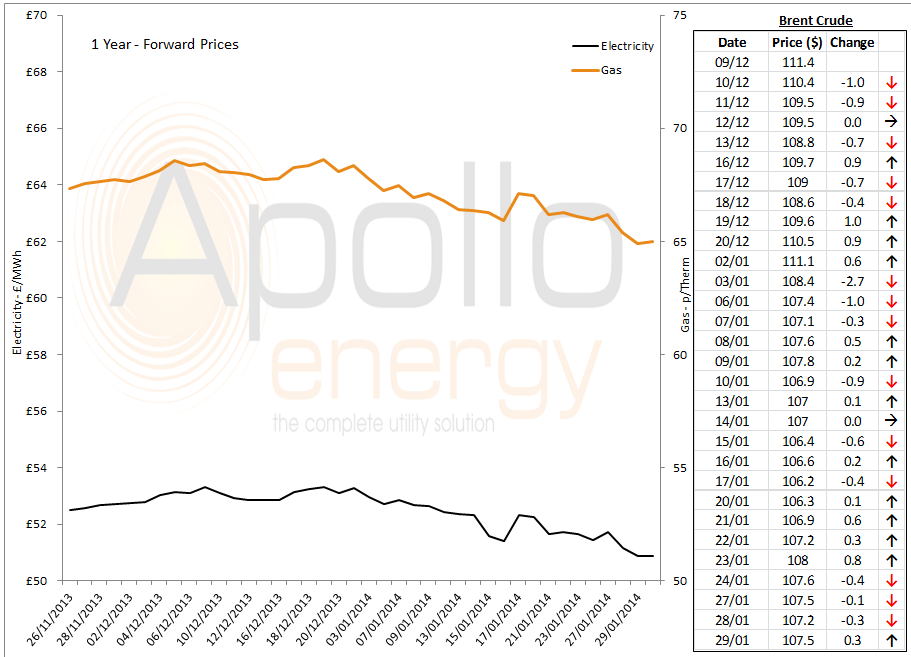