Spot power prices are on a steady rise as the current cold spell is lasting longer than originally expected. Prices are set to hold their prices this afternoon but milder weather is set to return midway through next week which will result in bearish movement. Gas prices recorded gains for the third successive day on Wednesday as demand levels were high and a further rise was expected. Today, the cold weather and a drop in Norwegian flows have led to further gains which should be maintained throughout the session.

There was little change to fundamentals yesterday as demand levels remained high and gas flows were weaker than previous days. Coal and Brent prices also strengthened which provided some support to the far-curve. It was a similar story on the power curve with upward movement displayed across the curve as consumption levels continue to rise.

Gas prices are currently dictated by the cold weather as demand levels remain above the seasonal norm for this time of year. Norwegian flows are down but this had little impact on the UK gas system which remained balanced, while storage levels are down to 60%. Power prices climbed higher this morning and followed gas closely, with cold weather hitting the UK this week and next. A drop in wind generation tomorrow failed to have much effect on the Day-Ahead contract which recorded another sizeable gain.

Market close data has revealed that the 1-year forward price for both commercial gas & commercial electricity moved higher- closing at 46.33ppt and £44.25/MWh, respectively. This can be seen in the graph below. 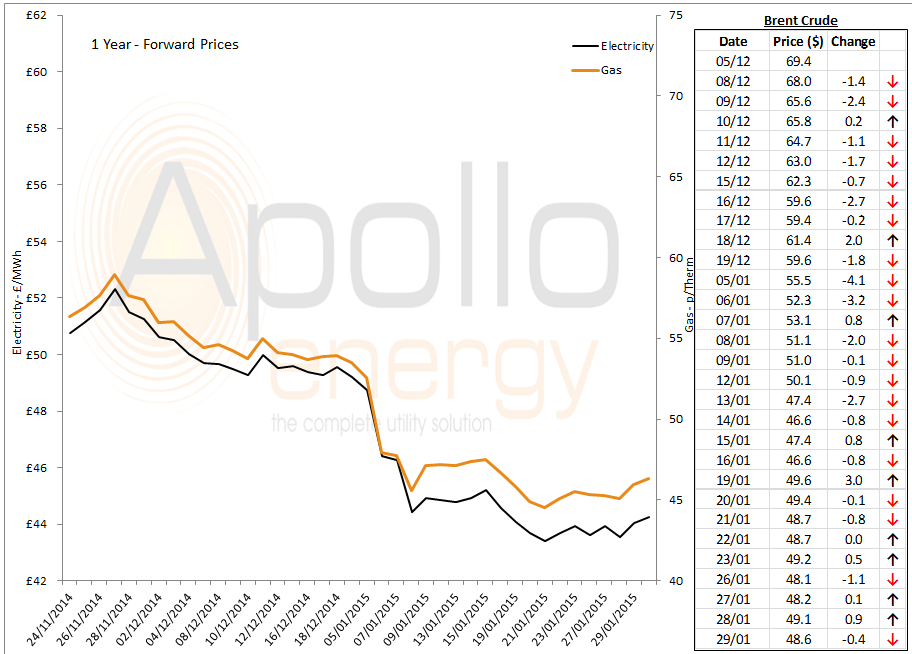 Brent 1st-nearby prices moved down yesterday and currently trade around $48.6/b due to yesterday's EIA report which showed that crude stocks in the US are at their highest level since 1982, when the government first began keeping a record.